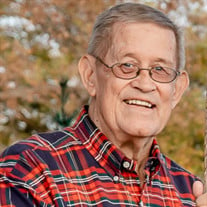 Not sure what to send?

Gere Allan Shive was born on June 17, 1949, in El Reno, Oklahoma to Billy Joe Shive and Betty Jean (Lorenzen) Shive. He went to Heaven on April 26, 2022. Gere was preceded in death by his parents, his brother Randy Shive, and his beloved son David Shive. Gere is survived by his wife Linda of home, son Greg Shive and his wife Lisa, daughter Shelly Gonzales and her husband David, daughter Amanda Landsaw and her husband Nick, his treasured grandchildren Mekel and Gavin Gonzales, Rylynn Landsaw, Hayley Smith, his favorite Aunt Patsy Gappa, brother Brian Beeler and his wife Karen, brother Jim Beeler, sister Barbara Jones and husband John, many nieces, nephews, and cousins. Growing up Gere proudly earned the rank of Eagle Scout at the age of 14. After graduating from Midwest City High School, he began his railroad career working as a Switchman for Rock Island Railroad and later retired from Santa Fe Railroad. He was a great bowler who loved bowling especially in competitive leagues and teaching his children how to bowl. He loved all outdoors, especially fishing. He was also a proud fan of OU football. Gere’s greatest accomplishment was his love for his family and spending time with them. His children and grandchildren were the heart of his life. He truly treasured the times he spent with each one of them and always made them feel important. His nieces, nephews, cousins, and spouses of his children all knew his love for them. He was also a mentor to many of his children’s friends and left a lasting impact on their lives. He was proud of each and every one of us, just as we were proud to be a part of his life. He will be greatly missed. Donations may be made to ‘LifeShare’ https://www.lifeshareoklahoma.org/ in loving memory of Gere Shive. **Celebration of Life Service for Gere Shive will be held at 1:00pm on Saturday, May 21, 2022, at The First Christian Church, 400 S. Barker, El Reno, OK. **Please join the family at Aunt Pat’s home, 818 S. Barker, El. Reno, OK, following the burial service at El. Reno Cemetery.

Gere Allan Shive was born on June 17, 1949, in El Reno, Oklahoma to Billy Joe Shive and Betty Jean (Lorenzen) Shive. He went to Heaven on April 26, 2022. Gere was preceded in death by his parents, his brother Randy Shive, and his beloved son... View Obituary & Service Information

The family of Gere Allan Shive created this Life Tributes page to make it easy to share your memories.