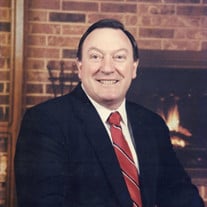 ***Please find Harold "Lelan" Clarks livestream starting at 12:50pm on Tuesday, February 22nd at this link: https://meadowood.online.church/ Harold “Lelan” Clark, 82, of Oklahoma City passed away peacefully at home on February 17, 2022. Lelan was born in Lexington, Oklahoma on September 16, 1939, son of the late Harold Clayton “HC” Clark and Beulah Faye Clark. Lelan graduated from Moore High School in 1957. He attended Central State University on a football scholarship and earned a master’s degree in Education. He and his brother, Jim Clark, were on the 1962 National Championship Football Team. Lelan and Imogene, wife of 62 years, were high school sweethearts and married April 2, 1960. Lelan began his successful 36-year coaching career as an Assistant Wrestling Coach at John Marshall High School from 1967 to 1970. John Marshall won the State high school wrestling championships those three years. In the 1970-71 season he was the Head Wrestling Coach at U.S. Grant High School, and his teams were the All-City Champions. Lelan was named the All-City Coach. He continued to coach at Grant one more year and organized the Little League Program. After resigning his teaching position there, he continued coaching at the Northside YMCA for three years and the Tinker YMCA for seven years. From 1972 through 1981 his teams won the YMCA Championships and twice won the Tulsa National Championships. In 1988, after many years out of the teaching profession, Clark accepted a teaching/coaching position at Harrah Junior High, and he received the Onions Martin Award for his contributions to wrestling. He continued to coach at Harrah until 1995, when he moved to Monroney Junior High to coach his grandson’s Dustin and Rob Wood. His Monroney teams won the 1999, 2001, 2003 and 2004 the All-State Junior High Championships. Lelan was named the Outstanding All State Junior High Coach. Lelan helped coach the Choctaw Junior High team in 2017, 2018 and 2019. The Choctaw teams won the All-State Junior High Championships in 2017, 2018 and 2019. Lelan not only coached wrestling, but he was one of the organizers and developers of the first Junior High All State Wrestling Tournament. He was the Director of that tournament from 1975 to 2022. He was also the Director of the Oklahoma Secondary Association State High School Wrestling Tournament, all classes, from 1979 until 1990. He donated his life to the sport of wrestling and was inducted into the National Wrestling Hall of Fame on November 21, 1999, for starting the Tinker YMCA wrestling program that took Midwest City wrestling to nationwide prominence and statewide dominance on the mat. His passion for the sport was fueled by the drive to teach and develop young men to believe in themselves and perform at their fullest potential. His discipline and expectations had an incredible influence in molding the character of young men. The work ethic they learned in the wrestling room transferred to many other areas of their life personally and professionally. Lelan excelled in many sports and had many hobbies. He was on the fencing team at Central State University and later taught fencing. He raced dragsters and stock cars in the 1960’s. He played fast pitch softball for 20+ years and was a representative for Oklahoma Softball in the 1980’s. He loved to hunt and fish and cherished his hunting/ fishing trips with friends and family. He loved nature, especially the mountains. He worked harder in his retirement years raising birds, gardening, and farming. Lelan is survived by his wife, Imogene Clark, his daughter Carla Wood, his son Mike and wife Trisha, his son Darryl and wife, Rowena, and son in law, William Wood, Jr. Grandchildren: granddaughter, Kaycee Boles and husband, Jeremy, grandsons Dustin Wood and Rob Wood, granddaughter, Courtni Medeiros and husband, Nelson, granddaughter, Maddie Ratterman and husband, Ian and grandson, Clayton Joseph “CJ” Clark, and granddaughter, Karis Clark. Great grandchildren: Brielle Boles, Brady Boles, and Remi Medeiros. Brother Rick Clark and wife, Carolyn, and numerous nieces and nephews. Uncle James Lee Clark and wife Barbara. Uncle Billy Clark and wife, Claudia. He was predeceased by his parents, H.C. and Beulah Clark, his sister Anita Hill, his brother, Jim Clark and wife, Phyllis, his brother David Clark, and wife Phyllis.

The family of Harold "Lelan" Clark created this Life Tributes page to make it easy to share your memories.

Send flowers to the Clark family.