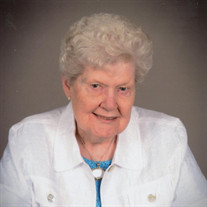 Harriett Sue Craig, 82, was embraced in the arms of Jesus Christ on March 8, 2020. Sue was born on February 23, 1938 in Medford, OK to Leslie Leland and Emily Gertrude (Parker) Craig. Sue was a graduate of Meeker High School and attended the University of Central Oklahoma (then Central State University), where she obtained both Bachelor of Art and Masters of Art degrees in Education. While at CSU, along with her sister Jane, she was a founding member of the local chapter of Sigma Kappa sorority. She spent her college summers working for the Oklahoma court system in the state capitol building. Sue taught elementary school in public schools for 38 years, mostly second grade and mostly in the Moore school system (with some time spent in St. Louis, MO; Yukon, OK; and Westminster, CA). Sue retired from teaching in 1999. She was an avid teddy bear collector and traveler, having enjoyed several trips to Europe, especially the United Kingdom, as well as numerous zoos, California, Santa Fe, Hawaii, British Columbia and Alaska. She and Jane were members of the first volunteer class at the Oklahoma City National Memorial Museum. Sue served as a volunteer at the Memorial from 2001-2018 and was a member of the Education and MVP Committees. Sue was honored as an Outstanding MVP (volunteer of the year) in 2002. In 2012, in recognition of her extraordinary service, she was recognized with the June Ranney Special Service Award. Sue was a faithful and joyful member of Meadowood Baptist Church, especially enjoying her ladies’ Sunday School class. Sue enjoyed good food, shopping, travel and watching movies, especially when doing so with friends or family. She was an exceptionally kind and loving person who made friends easily and who was especially smitten with children and dogs. Sue was preceded in death by her parents and elder sister Ann Savage and brother-in-law Gene Savage and elder sister Jane Van Burkleo. Survivors include her nephew, Craig Roberts, of San Diego; and numerous beloved cousins, friends, neighbors and former colleagues. The family will be receiving visitors on Friday evening from 6:00 to 8:00 p.m. at the Ford Funeral Service in Midwest City. The funeral service will be held at 2:00 p.m., Saturday, March 14, 2020 at Meadowood Baptist Church. Interment will follow at Arlington Memorial Gardens. The family extends its sincere appreciation to Oklahoma Heart Hospital South of Oklahoma City, Bellevue Health and Rehab Center of Oklahoma City and Hospice Quality Care of Midwest City. Condolences may be offered via Ford Funeral Service.

Harriett Sue Craig, 82, was embraced in the arms of Jesus Christ on March 8, 2020. Sue was born on February 23, 1938 in Medford, OK to Leslie Leland and Emily Gertrude (Parker) Craig. Sue was a graduate of Meeker High School and attended the... View Obituary & Service Information

The family of Harriett Sue Craig created this Life Tributes page to make it easy to share your memories.

Harriett Sue Craig, 82, was embraced in the arms of Jesus Christ...

Send flowers to the Craig family.