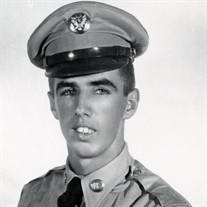 James Frank Freeman of Del City, Oklahoma passed away in his Nursing Facility room due to complications indirectly from Covid-19 (November 2020) wrecking his system (..his leukemia, diabetes and recently kidneys) at Emerald Care Center, Midwest City, Oklahoma on March 20th, 2021. He was 86. James was born July 9th, 1934 in Oklahoma City, Oklahoma. Parents were Ernest George Freeman and Mable Olivette Freeman (Sears). Brother to Helen Frances Wester, Robert Douglas Freeman and Lanny Ray Freeman. Elizabeth Ellen Freeman (Neble) took his hand in marriage September 1oth, 1960. Preceded in death by his loving daughter, Teresa (Tracy) Anne Tatum (Freeman) and is survived by his caring son, Gregory James Freeman. James graduated from Choctaw High School in Choctaw, OK in the spring of 1952. College, James graduated from Oklahoma State A&M to complete a Bachelor’s of Agriculture degree 1956. Drafted into the Army later that same year. Completing 2 years leaving Germany being transferred into Army Reserves to complete his service for his country. Upon coming back he worked for Oklahoma’s post office system for at least two years before starting a career on Tinker Air Force Base working his way up to Supervisory Materials Analyst retiring in 1989. While retired he loved to play Golf at various courses around the state and places around the country when he travelled. Since Highschool winning the Class B State Championship in baseball, James excelled in baseball and basketball while in the Army and later playing softball into his Senior years. Him and a couple of his Senior Softball teams even took two United States World Series of Senior Softball Championships. James followed up after his softball career umpiring Softball leagues and tournaments in the Oklahoma County area. He enjoyed going out to see his brother, his brother’s children and grand children’s sports games whenever he could. James was loved by many people and will be greatly missed.

The family of James Freeman created this Life Tributes page to make it easy to share your memories.

James Frank Freeman of Del City, Oklahoma passed away in his...

Send flowers to the Freeman family.