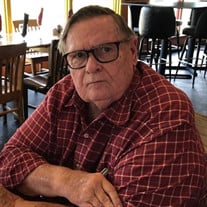 James “Jim” Allen Swatek, 84 years old from Oklahoma City, Oklahoma, went to be with the Lord on March 10th, 2022, surrounded by family and friends. Jim was born on May 29th, 1937, to Mike and Thelma Swatek. He was their first born, followed shortly by Carolyn. He went to various schools, finally graduating from Capitol Hill High School. During his time at Roosevelt Elementary School, he attended school with a young lady by the name of Marjorie Thompson. Little did he know, she would be the love of his life. After graduating high school, Jim joined the United States Air Force, where he served for 8 years, as a Military Photographer. After an honorable discharge, Jim tried his hand at various jobs in the Photography field, before finding his career at Milford/Snyder Corporation for 40+ years. Jim loved his work and took great pride in it. Jim attended First Southern Baptist Church of Del City where he joined the “Single Mingle”. At one of their gatherings, he met an animated young woman by the name of Marge. Unbeknownst to him, they had crossed paths years and years before. It was love at first site… well at least for Jim. Marge wasn’t too fond of him at first, but she came around. The two dated for 5 short months and have been happily married ever since. This July would have been 42 years. Jim had the most joy when traveling the world with the love of his life. They traveled boundless countries together making lifelong memories. Jim enjoyed researching everything about the countries before traveling there, so he was the travel guide extraordinaire to Marge and anyone who joined them. He took countless photos of their travels. This was one of the greatest joys in his life, traveling, eating good foods, and immersing himself in the cultures of every country he could. Jim always had the latest gadgets, and electronics to play with, and would not shy away from learning foreign languages. Besides traveling, the single most joy of his life was his family. Jim is joining his parents Mike and Thelma Swatek. He is survived by his sister Carolyn. Four children, Mike, Connie, Scott, and Jimmy. His three bonus children, Robert, Susie, and Richard. Grandchildren, Marisa, Bobby, Amy, Rachel, Bradley, Stephanie, Melissa, Josh, Shawn, Cassie, and numerous great grandchildren. “”Do not your hearts be troubled. You believe in God; believe also in me. My Father’s house has many rooms; if that were not so, would I have told you that I am going there to prepare a place for you? And if I go and prepare a place for you, I will come back and take you to be with me that you also may be where I am. You know the way to the place where I am going.” -John 14:1-1

The family of James "Jim" Allen Swatek created this Life Tributes page to make it easy to share your memories.

Send flowers to the Swatek family.