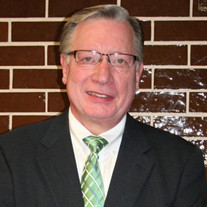 James “Jim” Rome Sample Jr., 65, of Florissant, Missouri, went home to be with Jesus at 2:15 AM on Saturday, March 21, 2020. Jim was born in Benton, Kentucky, on October 18, 1954, the oldest of eight children to James “Rome” Sample Sr. and Ruth Catherine Sample. Jim graduated from North Marshall High School in Marshall County, Kentucky, in 1972. He moved to Kansas City, Missouri, where he met the love of his life, Donna Wood, and they married on August 26, 1978. A year later they moved to Florissant, Missouri, where Jim enrolled in Gateway College of Evangelism. In addition to being a student, he served as dean of men from 1980-1982. After graduating with a degree in theology in 1982, he and Donna founded New Life United Pentecostal Church in Olathe, Kansas, and for three years he served as pastor. In 1985 Jim returned to Gateway College where Jim served as dean of students until 1990. He then served as assistant pastor at Florissant Valley Apostolic Church under Pastor Tim Dugas from 1990-1993. When Pastor Dugas became president of Gateway College in August 1993, Jim returned to Gateway as the administrative assistant to the president. In 1995 Jim began working at the Pentecostal Publishing House of the United Pentecostal Church World Headquarters as the Word Aflame Bookstore manager and executive assistant to the publishing house manager. From 2005-2008, Jim and his family became full-time evangelists and ministered across the country. In the fall of 2008, he returned for the final time to Gateway College to serve as campus pastor and help guide the students and staff through a time of growth and transition. At the conclusion of the 2010 school year, Jim became the director of sales for the Pentecostal Publishing House. As anyone who knew him can attest, Jim’s strength in leadership through transition was his trademark. This was once again fully evident in 2011 when he was asked to serve as pastor of the United Pentecostal Church in Columbia, Missouri, leading them in transitioning the church to its next phase of operation as well as a complete church remodel. In 2015, Jim returned to work at the Pentecostal Publishing House as director of sales and customer service where he was employed until his passing. Jim was an ordained minister with the United Pentecostal Church International for nearly 40 years. He also served on the Missouri District North American Missions Board for 31 years; the last 16 as director. He was a friend to church planters and was passionate about helping start new churches across the state of Missouri. He is survived by his wife of 41 years, Donna Sample, of Florissant, Missouri; two daughters, Rachelle Binion (Nick) of Midwest City, Oklahoma, and Kristen Johnson (Brent) of Choctaw, Oklahoma; four grandchildren, Ashlynn and Addison Binion and Frankie and Bennett Rome Johnson; his mother, Ruth Sample of Benton, Kentucky; seven siblings, Daniel Sample (Diana) of Paducah, Kentucky, Karen Schaeffer (Mark) of Morrow, Ohio, David Sample (Cecily) of Rochester, Minnesota, Joe Sample of Benton, Kentucky, Beth Joson (Benjamin) of Napa, California, Stephen Sample of Benton, Kentucky, Trent Sample (Kathy) of Princeton, Kentucky, along with numerous nieces and nephews. He was preceded in death by his father, Rome Sample. Jim loved people and counted hundreds as friends. He especially enjoyed spending time with family and traveling, visiting several countries and 49 states in the United States (Alaska was next)! He was a gifted singer and his Gateway students fondly remember him singing, “Pardon Me, My Holy Ghost is Showing.” On Saturday he took his greatest journey, shaking off the bonds of earth to enter his final destination. “I may never have my name on a building, but I have my name on people’s lives. That’s all that matters!” – Jim Sample (3-1-20) A memorial service will be held at a later date at The Sanctuary in Hazelwood, Missouri.

The family of James R. Sample Jr. created this Life Tributes page to make it easy to share your memories.

Send flowers to the Sample family.