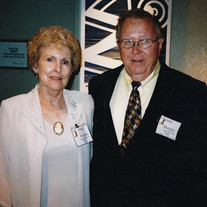 Jeremiah “Jerry” Murphy September 29, 1936-November 15, 2019 On November 15, 2019 Jeremiah “Jerry” Murphy passed peacefully while in hospice care at Mercy Hospital in Oklahoma City, OK. He had been in declining health over the last couple of years but his last days were peaceful and without pain. Jeremiah Murphy was born to Eileen & Michael Murphy in the Bronx, NYC NY on September 29, 1936. Jerry had two sisters- Maureen and Peggy- and one brother, John. All of them were raised in the NYC area. At the age of 17, Jerry enlisted in the United States Air Force. There, he would serve for more than 20 years before retiring with the rank of Technical Sargent. Most of Jerry’s military career was spent stationed at Tinker Air Force Base in Midwest City, OK but he was deployed to several foreign theatres including Vietnam and Turkey during that time. After retiring from the USAF, Jerry would spend another 20 years as U.S. Department of Defense Civil Service employee- also at Tinker AFB. Jeremiah wed Maud “Connie” Conyers Graham on May 16, 1958. From this union five children were born: Mary, Michael, Theresa, Kevin, and Patrick. All of their children attended St. Philip Neri School in Midwest City, OK. Regretfully, Connie passed in 1986. On October 5, 1991 Jeremiah Murphy married Mary Evelyn Ned. Jerry and Mary would spend roughly 20 years together before Mary too, was called home. Jerry may have been born in New York, but he was of Oklahoma. During his time here he was an avid fan of both OU and Dallas Cowboy football. He and his family have been lifelong long members of St. Philip Neri Catholic Church in Midwest City, OK. And, he was a proud member of the Tinker Air Force Base family for over 40 years in total. Preceding Jerry in death are his parents Eileen & Michael Murphy, wife Connie Murphy, son Michael Carl Murphy, and wife Mary Evelyn Murphy. Jerry is survived by his siblings- Maureen Lynch, Peggy Murphy, and John Murphy; his remaining children- Mary Eileen Murphy, Theresa Ann Murphy, Kevin Murphy & his wife Kathy Murphy, Patrick Murphy; and by the children of Mary Evelyn Murphy- Lorena & John Mateo, Morris & Evelyn Ned, Jeanne & Lamont Frazier, and Dennis Ned. Jerry is also survived by many nieces, nephews, grandchildren, and great-grandchildren.

The family of Jeremiah Murphy created this Life Tributes page to make it easy to share your memories.

Send flowers to the Murphy family.