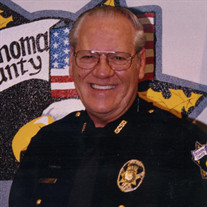 Jerry Lee Garner from Midwest City, Oklahoma passed away peacefully at his home on July 11, 2020 surrounded by his family. Jerry was born August 30, 1941 to William and Orlatha Garner of Oklahoma City. Jerry graduated from Midwest City High School in 1960 and joined the Army National Guard. He proudly served his country from 1960-1968. Jerry studied at Northwestern State University and attended the Traffic Institute in Chicago. Jerry began his law enforcement career at Midwest City Police Department in February 1967 and retired in May 1988. After retirement he began working at the Oklahoma County Sheriff's Department where he served for 12 years. He married the love of his life Carol June (Jurczewsky) Garner on October 12, 1974 at Good Shepherd Lutheran Church in Midwest City, Oklahoma. Jerry and Carol loved to go camping and enjoyed many different places throughout the years. The one place they loved the most was Colorado! Jerry and Carol spent many wonderful summers in Colorado. They always stayed at Blue Creek Lodge, and have made many memories and life-long friends there. Jerry loved to fish, hike, and four-wheel through the beautiful Colorado mountains. He also loved taking short day trips to see the old mines and cabins that they would find along the way. His love was spending time and relaxing with family and friends. Jerry is survived by his beautiful wife of almost 46 years, Carol; his children Tom (Connie) Garner of Yukon, OK , David (Pam) Garner of El Reno, OK, Carrie (Jeff) Cyr of OKC, OK, and Jennifer (Keith) Twombly of Minnesota; Sister Gloria (Claude) Green of Aurora, CO; Brother-in-law Larry (Georgette) Jurczewsky of Edmond, OK; and 7 wonderful grandchildren Christopher Garner, Halee Garner, Sabrina (Teetzel) Thul, Jessica Garner, Garrison Garner, Joshua Cyr and Alaina Twombly. Visitation will be at Ford Funeral Home in Del City, Oklahoma on Tuesday, July 14, 2020. Family will be present from 5pm to 8pm. A memorial service will be at Holy Trinity Lutheran Church in Edmond, Oklahoma on Wednesday, July 15, 2020 at 2pm. His final resting place will be at Memory Lane Cemetery in Harrah, Oklahoma. Jerry was preceded in death by his parents William Thomas Garner, and Orlatha Garner; several aunts and uncles; his precious dog Hershey who passed away exactly 1 year before, she was the love of his live. Donations can be made in Jerry's honor to The National Law Enforcement Officers Memorial or The American Cancer Society. Thank you to all the staff at Saint Anthony Hospital and Hospice Quality Care for taking such great care of Jerry. We also want to thank Ford Funeral Home for helping us plan and make arrangements to honor and remember such an amazing man. We would also like to thank Holy Trinity Lutheran Church and our Pastor, Barrie Henke, for being here for all of us through this journey. Forever our Hero! To watch Jerry Garner's funeral service virtually, please click on the link below: http://www.holytrinityedmond.org/live

The family of Jerry Lee Garner created this Life Tributes page to make it easy to share your memories.

Send flowers to the Garner family.