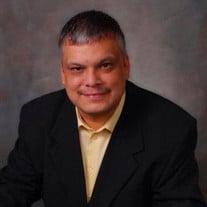 Jerry James Heath, a resident of Harrah, OK, passed unexpectedly from this life and entered into eternal life with his Savior on January 1st, 2021 at the age of 54. Jerry is survived by, his wife Geana Heath, son Dillan Heath, mother Lorraine Heath, brother Timothy Heath and many other extended family and friends. Jerry was preceded in death by his father James L Heath, August 7th, 2020. Jerry was born in Los Angeles, CA on July 20th, 1966 to James L and Lorraine L Heath. His parents moved him and his brother from California in 1975 to Oklahoma. Jerry remained a resident of Oklahoma for the rest of his life. He graduated from Harrah High School in 1984 and also studied at OSU in OKC while working towards an associate degree. Jerry married the love of his life, Geana Kay Carr, on July 21, 1985 at the age of 19. Jerry’s love for his wife was always on display during their 35 years of marriage. After eleven long years they were blessed with their son, Dillan James Heath. Jerry’s love for his family was easy to see they were the most important part of his life. Jerry had numerous musical gifts and talents that he loved to use for God. He used them in churches and when given opportunities for jam sessions, he thoroughly enjoyed playing with other musicians. His love for music and being a musician started at an early age. His Dad taught him to play the guitar at the age of 7. Those who have attended church services at Choctaw Church of God have witnessed his talents to play the guitar, steel guitar, piano, drums, bass guitar, violin, and basically any instrument he would set his mind to play. Jerry was also a very tech savvy individual. He always made himself available to come to the aid of many of his friends and family who needed help with computers, cameras or other electronic devices. He rarely passed up an opportunity to exhibit his skills, especially in photography. He has taken many photos for weddings, graduations, anniversaries, and other events. He really had a love for photographing wildlife and has posted numerous photos of deer, birds, and other animals for all to enjoy. He even had a few of his photos published in an Oklahoma magazine. Jerry began his working career in 1985 when he started building transmissions at Fred Jones Manufacturing, now known as ATC Drivetrain. He soon became a lead-man and his vast knowledge of transmissions lead to his long career in manufacturing. His recent position in the Engineering Department as Test Systems Manager gave him the opportunity to take a recent business trip to England to share his knowledge of transmission test-stand technology. Jerry was a Godly man and he really loved attending Choctaw Church of God where he over the years held several positions in the Church. Youth Leader, Sunday School Teacher and most recent the Church Clerk and Pastors Council Board Member. Jerry recently upgraded the Church Technology for live streaming the Sunday morning church services. Everyone that knew him, quickly learned that he didn’t do anything halfway, he was very meticulous and intentional about doing it as close to perfection as humanly possible. He was a loving husband, father, son, brother, co-worker and friend. He is irreplaceable and missed dearly by us all. As we are left on earth to undergo this devastating loss, we find comfort in knowing heaven has gained one of the greatest! Jerry we look forward to seeing you in your new home. Funeral Service is scheduled for 2:00 p.m. on Thursday, January 7th, 2021 at the Choctaw Church of God. Interment Grave Side at Elmwood Cemetery. Pastor Stephen P Carr and Reverend Kevin R Bryant will officiate. https://gofund.me/d56c6144

Jerry James Heath, a resident of Harrah, OK, passed unexpectedly from this life and entered into eternal life with his Savior on January 1st, 2021 at the age of 54. Jerry is survived by, his wife Geana Heath, son Dillan Heath, mother Lorraine... View Obituary & Service Information

The family of Jerry James Heath created this Life Tributes page to make it easy to share your memories.

Send flowers to the Heath family.