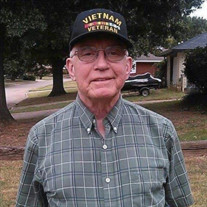 Jimmy Chester Harris, age 76 of Midwest City, Oklahoma passed away on October 10, 2020 at his home in Midwest City. Jim was born in Clinton Oklahoma. His Father was Earnest "Hank" Harris of Shawnee and his mother Helen Kirkendall of Tribbey who passed away at his birth. His grandmother was Cleopatra Frame from Missouri and his grandfather was John Clayburn Harris of Tecumseh, Oklahoma. He was raised by his dad, his grandmother, and his Aunt Lucille Parker of Tecumseh. He served in the United States Army from October 1967 to March 1969. He was a Vietnam War Veteran serving with the Combat Engineers in Vin Long. He was proud of his service time but never shared his experience there and suffered with PTSD sleep disorder. After his service time, he came home to Midwest City, Oklahoma and worked for C.R. Anthony Company as an Assistant Manager. In 1970, he was hired at Tinker Air Force Base, as an aircraft mechanic where he proudly worked for the Air Force 36 years and retired in January 2004. He is survived by his wife Barbara Michelle Littleton, from Shreveport, Louisiana, his son Donald E. Harris and his wife Patty from Reno, Nevada, his daughter Kibbley Anne Shrock and husband James from Oklahoma City. Five beautiful granddaughters Tiffany Griffith, Captain Diana Michele Harris, US Army, Lieutenant Julie Marie Harris, US Oklahoma National Guard, Taryn Arianna and Ryian Sierra Griffith of Ardmore, Oklahoma and is preceded in death by Kyile Lynn Hailey and Melissa Sue Harris. He was a deacon and member of First Baptist Church of Midwest City where he served his God with love and humility until, Rheumatoid Arthritis caused his decline in health. He was a good man, loving husband, loving and dedicated father. Family was very important to him and he never met a stranger.

Jimmy Chester Harris, age 76 of Midwest City, Oklahoma passed away on October 10, 2020 at his home in Midwest City. Jim was born in Clinton Oklahoma. His Father was Earnest "Hank" Harris of Shawnee and his mother Helen Kirkendall of Tribbey... View Obituary & Service Information

The family of Jimmy C. Harris created this Life Tributes page to make it easy to share your memories.

Send flowers to the Harris family.