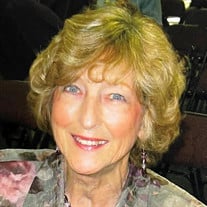 Joan M. Harris left this earth on 12/01/2021 to meet her Heavenly Father and to be reunited with her beloved husband of 61 years, Donald K. Harris. Don passed in 2015, and while we mourn the loss of Joan, we celebrate their reunification in heaven. Born 4/12/1934 in Marlow, OK to Cecil and Ida Hurley, she moved to Midwest City, OK as a teenager. It was there that she met her high school sweetheart and future husband, Don. They were wed in 1953. She was a devout Christian throughout her life and was a member of the First Southern Baptist Church of Del City. Her faith was her guiding compass in this world, and she bestowed her Christ-like values to those who she leaves behind. Much of Joan’s life was spent as a homemaker, first as a young mother caring for her children, and in her later years- a loving grandmother. She was a wonderful cook and leaves us with many Great Depression-era family recipes. Joan also enjoyed collecting antiques and tending to her garden, which provided her home with a beautiful display of flowers each spring. An award winning artist, she spent many years painting with both oil and watercolors. As a member of the Red Hat Society, Joan remained active in friendship and fellowship until her final days. We are forever grateful of the impact she had on our lives, and we celebrate her celestial homecoming. Joan was preceded in death by her father, Cecil Hurley; mother, Ida Hurley; brother, Bobby Hurley; sisters, Connie Davis & Pat Blackwell; and husband, Don Harris. She is survived by her daughter, Donna Anneler; son, Keith Harris; her two grandsons, Ryan Ainsworth, Kevin Harris, and step-grandson, Caleb Coker. She is also survived by three great-grandchildren, Daxton Harris, Olivia Harris, & Lyla Harris. A graveside service will be held at 2:00 PM on Wednesday, December 22nd, 2021, at Sunny Lane

Joan M. Harris left this earth on 12/01/2021 to meet her Heavenly Father and to be reunited with her beloved husband of 61 years, Donald K. Harris. Don passed in 2015, and while we mourn the loss of Joan, we celebrate their reunification in... View Obituary & Service Information

The family of Joan M. Harris created this Life Tributes page to make it easy to share your memories.

Send flowers to the Harris family.