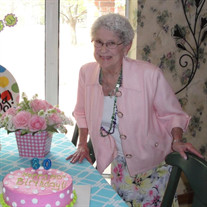 JoAnn Catharine (Lemon) Hahn was born April 17th, 1931 in Los Angeles County, CA to Glenn & Catharine Lemon and passed away at home on Christmas night 2021. She had moved to El Reno, Oklahoma at an early age and spent her younger years growing up in the old El Reno Hotel, which her mother and grandmother operated as a boarding house. She graduated from El Reno High School, and shortly thereafter married that “cute fella” that offered her a ride when she was walking home in the rain. JoAnn and Roy Hahn were married on June 26th, 1949 and until her death, they were best friends and constant companions. They raised three children in a small house on Kerr Drive that was filled with love. She went from being Mom to Grandmother to Great-Grandmother in that same house, the love only increasing with each addition to the family. “GawGaw”, as she was better known, made sure everyone felt that love by the way her eyes lit up when you came in the door. Her love was constant and unwavering, and if you were lucky enough to experience it, you were truly blessed. As her own children were growing up, she babysat other children in her home. She later worked outside the home in the insurance field, and retired from Wheeler Insurance Agency. She was always active in their church, First Presbyterian in Midwest City, serving in numerous positions and working with the Mobile Meals program. JoAnn and Roy became world travelers and enjoyed many wonderful trips, visiting England, Germany, Australia, Hawaii, New Orleans and China; taking Caribbean and Panama Canal cruises, and touring numerous other destinations, always bringing back as many mementos, brochures, maps and gifts as she could carry in her suitcase. JoAnn was a sports fan. She loved the OSU Cowboys (all 3 of her children obtained their degrees at Oklahoma State), and any sport that her children or grandchildren were participating in. She and Roy went to as many events as they could, watching and cheering at basketball, football, baseball & soccer games, track & cross country meets and wrestling matches. And, she might have shared her difference of opinion with a referee or umpire a time or two, but always in a kind manner. She often “coached” the NFL, NBA and MLB from her living room recliner, as she watched games with Roy! JoAnn leaves behind the love of her life, her husband of over 72 years, Roy D. Hahn; her three children, Linda Hogan, Larry Hahn (wife, Lisa) and Joanie Altendorf (husband, Andrew); seven grandchildren, Lori Hogan Willis (husband, Rob), Emily Altendorf Neurohr (husband, Ryan), Kevin Hogan, Sarah Altendorf Ostermann (husband, Seth), Patrick Altendorf (wife, Katelyn), Nicholas Hahn (wife, Sanaz) and Cooper Hahn; fourteen great-grandchildren, Cade & Cole Willis, Cate, Charlie, Callie & Caleb Neurohr, Cameron Hogan, Sam, Gracie & Jack Ostermann, Annie, Louise & Mary Frances Altendorf and Rory Hahn; two nephews, Richard Lemon & David Lemon and one niece, Donna Lemon Maxwell. JoAnn was predeceased by her parents, Glenn Lemon and Catharine Lemon, step-mother Virginia Lemon, brother Richard Lemon, son-in-law Kenneth Hogan and several brothers & sisters-in-law. Though small in stature, JoAnn was strong, capable, determined and loyal, and she was steadfast in her faith in God. One of her favorite sayings was “Prayer is Mighty”, and our prayer is that she felt our love until her last breath. We will miss her so very much. The funeral service will be held at 11:00am on Wednesday, January 5th, 2022 at the First Presbyterian Church, 900 Key Blvd. in Midwest City. Arrangements are under the direction of Ford Funeral Service, 305.S. Sooner Road, Midwest City, OK. In lieu of flowers please consider making a donation to First Presbyterian Church of Midwest City in JoAnn's name.

JoAnn Catharine (Lemon) Hahn was born April 17th, 1931 in Los Angeles County, CA to Glenn & Catharine Lemon and passed away at home on Christmas night 2021. She had moved to El Reno, Oklahoma at an early age and spent her younger years growing... View Obituary & Service Information

The family of JoAnn Catharine Hahn created this Life Tributes page to make it easy to share your memories.

Send flowers to the Hahn family.