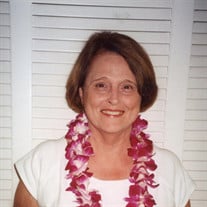 JoAnn (Foster) McDonald was born February 21st, 1936 in Hattiesburg Mississippi to John M Jr, and Clara Elizabeth Foster. JoAnn left this world into the arms of her Heavenly Father on Sunday, November 22, 2020 at the age of 84, On June 1st,1952 Jo Ann married the love of her life, Tom McDonald. A marriage that lasted thirty-one years until his death in 1983. JoAnn was an Air Force wife for over two decades. The family moved around many times over the years, but JoAnn made each residence a comfortable and inviting home. She was an extraordinary cook, taught by her grandmother who raised her in Mississippi, JoAnn also sewed beautifully and made most of her own clothes as well as her children's during her younger years. JoAnn was a homemaker during her children's growing up years but later worked for the State of Oklahoma Disability Insurance Department for 18 years. She also was a member of First Southern Baptist Church of Del City for many years where she taught a children's Sunday school class and she also sang in the choir. JoAnn was preceded in death by her husband, Thomas M. McDonald Sr. She is survived, by one brother, John M. Foster III and his wife Hilda of San Diego, CA, her daughter Sherry Walker and husband Lee of Del, City, OK, her son Thomas M. McDonald Jr. and his wife Janice of Moore, OK, her daughter Rachel Martin and husband Gene of Mustang, OK, 6 grandchildren Nathan, Ben, Amber, Mandy, Michelle and Jesse, 5 great grandchildren, lvy, Maddox, Caden, Greyson and Brooks. Those who knew JoAnn will remember her as a strong, feisty woman who loved her family with all her heart and who always put her faith in God. She will be greatly missed.

JoAnn (Foster) McDonald was born February 21st, 1936 in Hattiesburg Mississippi to John M Jr, and Clara Elizabeth Foster. JoAnn left this world into the arms of her Heavenly Father on Sunday, November 22, 2020 at the age of 84, On June 1st,1952... View Obituary & Service Information

The family of JoAnn McDonald created this Life Tributes page to make it easy to share your memories.

Send flowers to the McDonald family.