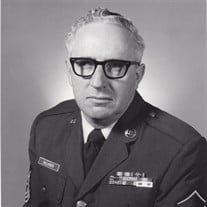 Senior Master Sergeant (Retired) Joseph A. Gallagher On the 10th of February, 1934, in Duryea PA, our ever-loving GOD in his infinite wisdom, graced us with the birth of our beloved Joseph A. Gallagher. He is married to the late Josie Gallagher whom he affectionally call his “HoneyBabe”. His loving parents are the late Thomas and Ruth Gallagher. His GOD-loving life ended 87 years later on the 26th day of March, 2021 in Oklahoma City, OK. After graduating from High School, he then attended King’s College. However, his short college schooling was replaced with a strong desire to pursue a career in the US Air Force. A few years later, he confided this new found passion to his brother as “…the best thing that ever happened in my life”. His love for this service took him to a multitude of assignments including: Sampson AFB, NY, Bolling AFB, DC, Lowry AFB, CO, Dyess AFB, TX and overseas assignments to Kadena AB, Japan and Clark AB/Camp O’Donnell, Philippines with number of temporary visits to Vietnam. His distinguished career culminated after faithfully serving 28 years in the US Air Force. He lovingly treated all his step-children as his own blood relatives and was equally reciprocated. His extended family and their spouses included three living step-daughters: Linda Kondo, Denver,CO, Evelyn & Desi Cutaran, Oklahoma City, OK, and Marilou & Angel Lumba, Denver, CO. One step-son Joseph & Kularb Kondo, Pensacola, FL. Step-son George Kondo and step-daughter Thelma Posner preceded him in death. Their surviving spouses are Dollie Kondo, San Francisco, CA and Ivan Posner, Las Vegas, NV, respectively. He is also survived by two brothers, James, Bridgewater NJ; Thomas and his wife, Anne, Collegeville, PA; four sisters, Mary Murtha, Augusta, WV; Eileen Nahigian, East Amherst, NY; Nancy Adomiak, Avoca, PA; Ruth Nolan, Piscataway, NJ; sister-in-law, Ann Bannon Gallagher, Fort Wayne, IN. In addition to his parents, he was preceded in death by his brother Gerard (Jerry) and his four brothers-in-law and one sister-in-law. He will surely be missed by his surviving extended families, brothers & sisters and numerous grand-sons and grand-daughters, and great grand-children, nieces, nephews, grand-nieces, grand-nephews, cousins, and friends

Senior Master Sergeant (Retired) Joseph A. Gallagher On the 10th of February, 1934, in Duryea PA, our ever-loving GOD in his infinite wisdom, graced us with the birth of our beloved Joseph A. Gallagher. He is married to the late Josie Gallagher... View Obituary & Service Information

The family of Joe A. Gallagher created this Life Tributes page to make it easy to share your memories.

Senior Master Sergeant (Retired) Joseph A. Gallagher
On the 10th...

Send flowers to the Gallagher family.