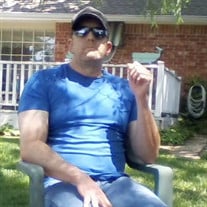 John was born November 5, 1973 to proud parents Lonnie and Sharon Austin. He came into this world in a hurry barely half an hour after his mother arrived at the hospital. He was named after his father and two grandfathers, John Berger and Albert Austin. He was a chubby happy bundle of joy. His sister, Sherry, “adopted” her new brother and quickly tried to “talk” for him, expressing first one thing and another until she satisfied his “squeals” of protest. It took John a year before he actually found a need to talk himself. But once he did, he became the proverbial “Man of few words.” As a boy he loved to ride his bicycle and be outdoors. That love for nature never left him, only grew stronger. John was a thinker. His early “Christian” teaching by his loving mother set him on a right path that guided his character for all his life. He grew straight and tall into a good and kind man. Never one for frills, he was a frugal man who lived simply. A man, who honored his elders, showed respect for his teachers, was well liked by his peers and always gave the benefit of doubt to the downtrodden. John took pride in his appearance. He worked out daily and chose foods that helped to build and sustain his body. John took a job at Oklahoma County in 1995, starting at the bottom as a “helper.” A family friend, John Moles, guided his on the job training. Over the years John learned the skills of an electrician and how to handle asbestos. Those skills earned him successive promotions at work. He became the Communications Supervisor for the past few years of his career. His electrical skills were really appreciated when he completely wired his Dad’s new shop building back in 2000. Just watching him install wires, boxes, switches and lighting so methodically and smoothly was a joy to see. John took his work seriously. He was never heard to speak harshly of others. He was well liked by his co-workers. John was a loving son. He spent many a hour having lunch on Saturday mornings with his Dad where the lazy unfiltered conversations drifted from traveling to faraway places, to the latest “hot” cars and pickups, sail boats and camping , to the contemplating the deeper meaning of life and the mysteries of the universe. But above all John was a practical man, careful with his money and even more so his affections. John had just recently met Stacy Kolb with whom he quickly formed a true and deep affection…love. He expressed his feelings for Stacy to his Dad and sister, something he had not done before. He was looking forward to so much, but life doesn’t ever go as we expect. He enjoyed so many gifts of life, except for length of days. John passed away July 18, 2020. He will be eternally missed by all who knew and loved him.

John was born November 5, 1973 to proud parents Lonnie and Sharon Austin. He came into this world in a hurry barely half an hour after his mother arrived at the hospital. He was named after his father and two grandfathers, John Berger and Albert... View Obituary & Service Information

The family of John Albert Austin created this Life Tributes page to make it easy to share your memories.

John was born November 5, 1973 to proud parents Lonnie and Sharon...

Send flowers to the Austin family.