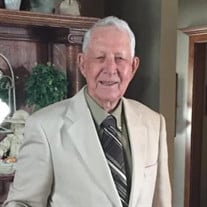 John “Jack” Henry Ogle of Del City, OK passed away peacefully at his home in Blanchard at the age of 88 on March 24, 2021. Jack was born on June 30, 1932 in Union City, OK to Homer and Hilda Ogle. He grew up in Choctaw and at the age of 16, he joined the Army National Guard as a Private First Class in the 45th Division. On August 26, 1955 he married his wife of 65 years, Virjean, in Wetumka, OK. They created a loving home together in Del City where they raised three children, Terry, Ron and Ann Renè. Jack and his family were very active in their church, Meadowood Baptist Church where they have been members since 1973. He proudly served in the Korean War and after 40 years of service in the State Military Department, he retired as a Lieutenant Colonel. His greatest joys were raising his family, spending time with his grandchildren at the farm, and driving his Model A’s in local parades. Jack is survived by his wife Virjean of the home; son Terry, son Ron and wife Lisa, daughter Ann Birdsong; grandchildren Ashleigh Heffernan and husband Jake, Derek Birdsong and wife Kassidy, Abby Gasper and husband Matt, Allyson Cochran and husband Kyle, Nicholas Ogle, Alexis DeRoin and husband Caleb, Corban Ogle, Eli Ogle; great-grandchildren Kollyn, Carston and Easton Heffernan, Dawson Henry and Cecelia Birdsong, and Goldie Gasper; and brother Charles. He was preceded in death by parents Homer and Hilda; siblings Leon, George and Bea; in-laws Orville and Pearl; and son-in-law John Birdsong. Services will be officiated by Bob Rutherford on Saturday, March 27th at 10 a.m. at Meadowood Baptist Church (Main Sanctuary) in Del City. Masks and Distancing are encouraged where possible.

The family of John 'Jack' H. Ogle created this Life Tributes page to make it easy to share your memories.

Send flowers to the Ogle family.