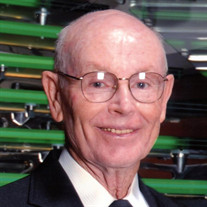 John Vernon “JV” Provence, 91, of Del City, OK passed away peacefully in his sleep at home surrounded by family on Tuesday, May 11, 2021. John was born August 6, 1929 in Atoka, OK to H.C. “Jack” and Irene Provence. After his mom’s death, his father married Flo Williams. A few years later H.C. and Flo bought a store and some land in Bruno, OK where they raised John and his sister Maggie and brother Clyde. After graduating Atoka High School he was drafted to the U.S. Army where he served from 1951 until 1953 and then served in the Army Reserves for 5 years and was a Master Sergeant at the time of his discharge. John married Johnnie Mae Dickson on December 20, 1953 and worked as a mechanic at Collier Chevrolet in Atoka, OK. They had 2 children, Mickey and Kathy. The family moved to Stillwater where he attended Oklahoma A&M on a GI bill and was the first graduating class of Oklahoma State University receiving a B.S. Degree. He was an auto mechanic teacher at Del City High School from 1958 to 1964. He furthered his education at Central State College earning his Master’s Degree in Teaching in 1967. He became the Director of the Oklahoma City Skill Center for many years and was asked to start the State run Vo-Tech at Tinker Air Force Base where he retired. John then married Betty Jo Lake on April 19, 1968 and were married for 42 years. They raised Betty’s two girls, Vicki and Kathy Jo. During their marriage and through his retirement they traveled all across the U.S., Canada and Europe. He loved the outdoors, hunting and fishing and was also an avid bowler and loved golf. He bowled for 30 years for Del State Bank. John married Loretta Owen on September 26, 2015 at Meadowood Baptist Church. They enjoyed several years together and were very active in the church. John was preceded in death by his parents, H.C, Irene and Flo Provence, sister Maggie, brother Clyde, his wife Betty Provence, and grandson John Micah Provence. He is survived by his son Mickey and wife Debbie Provence of Roff, OK, daughter Kathy Havlik of Oklahoma City, daughter Vicki Wells of Oklahoma City, daughter Kathy and husband Karrol Brinlee of Newalla, OK, grandchildren Shannon Tillotson, Brandi Whyatt, Daniel Brinlee, Meghan Brakebill, Shelby Havlik, Tyler Wells, Travis Wells and Great Grandchildren Emery Perry, Garett Whyatt, Grayson Cornelius, Makayla Provence, Presley Tillotson, Brynlee Cornelius, Gentry Bresnahaa, Frankie Brakebill, Cooper Wells, Johnnie Herriman and Brock Brakebill. Along with many nieces and nephews. He loved and cherished his time with everyone. Visitation will be held on Friday and Saturday, May 14th and 15th and visitation with family on Sunday, May 16th from 2pm to 4pm at Ford Funeral Service located at 305 S. Sooner Road, Midwest City, OK. A graveside service will be held on Monday, May 17th at 1pm at Green Meadows Cemetery. In lieu of flowers John and family would appreciate donations to Master’s Market-Mission at 5751 E. Reno Ave., Midwest City, OK 73110, (405)737-2010, or you can donate online.

The family of John Vernon (J.V.) Provence created this Life Tributes page to make it easy to share your memories.

Send flowers to the Provence family.