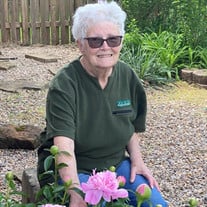 Judith Markman Dean died on the afternoon of Aug 26, 2021, at the age of 78 in Oklahoma City, Oklahoma. Judy was born in Muskegon, Michigan to Alan and Laurel Markman. Judy attended Shaler High School and graduated from the University of Pittsburgh in 1964 majoring in Chemistry. In 1964, Judy married her lifelong spouse John Dean in Glenshaw, Pennsylvania. She worked as a chemist with the Mellon Institute in Pittsburgh, Pennsylvania and Dowell in Tulsa, Oklahoma. In 1980 she formed Meadowbrook Oil Corporation and served as President for 40 years. Judy lived in many places as a child, settling in Del City, Oklahoma in 1969. Her family moved from Michigan to Tennessee then Pennsylvania. During World War II, Laurel took the infants Judy and her twin sister to Brazil aboard a military aircraft to meet their deployed father for the first time. Similarly, over Christmas, 1965, John and a pregnant Judy moved from Pittsburgh, Pennsylvania to an oil camp in Northeastern Utah called Red Wash. Judy worked as a volunteer with the American Institute of Discussion encouraging reading and discussing topics and ideas in literature. She supported her children throughout their lives including volunteering as Cub Scouts Den Mother and classroom mother. She collected and enjoyed artwork consisting of portraits, sculptures, engravings, pottery, and other media. Judy had a green thumb for indoor and outdoor flower gardening, and she loved animals. During High School, Judy participated in an American Field Services foreign exchange student program spending the summer of 1959 in Germany. She maintained a lifelong friendship bond with her German host family, writing many letters and visiting them several times as an adult. This experience fostered her love of travel with destinations including Europe, New Zealand, Australia, Puerto Rico, Alaska, and many other locations in the United States. Judy is survived by John Dean, her husband of 57 years, along with: • Son Alan Dean of Pearland, Texas • Son Michael Dean and wife Lynette of Del City, Oklahoma • Daughter Lara Bennett of Richardson, Texas • Grandchildren John David Dean of Del City, Oklahoma and Tom Bennett, Annie Bennett, Sam Bennett, and Ella Bennett of Richardson, Texas. • Extended family members Joshua Thornton and his daughter Ziah; Shelby, KJ, and Henry Wolford. • Identical twin sister Barbara Geisler and husband Donald Geisler of Chester, Virginia and their children Richard and Brenda. • Brother-in-law Philip Pope of Garland, Texas and his children Debra and Myra. • Brother John Markman and wife Betsy Markman of Greeley, Colorado and their children Nathanael, Phillip, and Andrew. Judy is preceded in death by her parents Alan and Laurel Markman along with her sister Peggy Pope. A virtual memorial service will be held on Tuesday, September 7, 2021, at the Ford Funeral Home in Del City, Oklahoma. The service will be available on-line for 90 days. In lieu of flowers or donations, please consider a donation to your favorite charity.

Judith Markman Dean died on the afternoon of Aug 26, 2021, at the age of 78 in Oklahoma City, Oklahoma. Judy was born in Muskegon, Michigan to Alan and Laurel Markman. Judy attended Shaler High School and graduated from the University of Pittsburgh... View Obituary & Service Information

The family of Judith Markman Dean created this Life Tributes page to make it easy to share your memories.

Customized sympathy cards. Mailed for you.