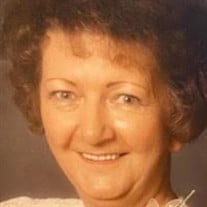 Judith Mary Floresca died peacefully in her sleep in the early morning hours Monday, June 7th. Judith (Judy) was born on July 7, 1937 in Ipswich, England to Sidney and Alexandra (Powell) Williams. Sidney was enlisted in the Royal Navy as an Able Seaman and died at the young age of 35 from Pulmonary Tuberculosis when Judy was only 3 years old. Judy attended Rose Hill Road Primary School, then Copleston Modern Secondary School for girls, where she spoke of having to carry a gas mask to school every day living in fear of Germany dropping gas bombs during WWII. Judy met her future husband George while he was stationed at Bentwaters AFB near Ipswich. They were married in Ipswich in 1955. Their first son, Dale, was born in Ipswich on July 23, 1956. Second son, Glenn, was also born in Ipswich on October 9, 1957. George was then relocated to Myrtle Beach AFB where son Mitchell was born January 29, 1959 and Nicholas was born July 27, 1960. They continued military service moving back to England (Suffolk), then located in Ogden, Utah. While George served in the Vietnam War, he moved the family to Schenectady, NY, to live near their best friends Bruce and Marion Fronk. After serving time in the Vietnam War (and receiving a Bronze Medal), George served the last of his 20+ years as an explosive ordinance specialist for the Air Force at Tinker AFB, where he, Judy and the family settled. Judy and George were married 48 years until George lost his battle to stomach cancer in 2004. Judy was a devoted military wife who had to serve as both mother AND father during George’s absence (which was most of the time). Four boys in four years should have earned her the Congressional Medal of Honor with all the shenanigans she NO DOUBT had to endure. She remained very proud of all her boys and never missed any of their athletic endeavors (football, baseball, gymnastics and SEVERAL wrestling matches). She was also a DIE HARD Oklahoma State fan (where sons Glenn and Mitch attended college) and NO DOUBT bled orange. The family was season ticket holders several years and never missed attending the football games (yes, even the ICE BOWL in 1985 where they got stuck to the bleachers). When it became too difficult to attend the games, Judy would coach from her living room-she LOVED her Pokes! Judy started showing subtle signs of Alzheimer’s Disease approximately 3 years ago, but remained in the home under the care of youngest son Nick until the disease took a turn for the worst in late February of this year. Unable to walk and formally diagnosed, she was moved to Tuscany Skilled Nursing Facility in the Village where she remained until her death. Judy was preceded in death by her father Sidney, mother Alexandra, brother Sidney, and husband George. Judy is survived by their 4 sons: Dale (Lubbock, TX) and his children; Danielle Rose (husband Brayden), Daphne Buchanan (husband Conlan), and Devon Floresca (and her son Daxton) Glenn and his wife Elaine (Oklahoma City, OK) and their daughter Beth Thomas (husband Michael) and son Jacob Mitchell and his wife Dondra (Edmond, OK) and their daughter Alexandra Nicholas (Midwest City, OK), as well as several nieces and nephews. The family would like to thank Tuscany Skilled Nursing Facility in the Village and Frontier Hospice for taking care of Judy during her final days. A family graveside service will be held at Arlington Gardens Cemetery on Friday, June 11 at 10:30 AM. In lieu of flowers, the family requests donations be made to the Alzheimer’s Association at https://act.alz.org/

Judith Mary Floresca died peacefully in her sleep in the early morning hours Monday, June 7th. Judith (Judy) was born on July 7, 1937 in Ipswich, England to Sidney and Alexandra (Powell) Williams. Sidney was enlisted in the Royal Navy as an... View Obituary & Service Information

The family of Judith Mary Floresca created this Life Tributes page to make it easy to share your memories.

Judith Mary Floresca died peacefully in her sleep in the early...

Send flowers to the Floresca family.