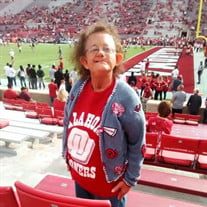 Katherine Gail Shively (Kathy), age 69, of Del City, Oklahoma passed away Sunday June 23, 2019, in Midwest City, Oklahoma. The original April Fool, Kathy was born on April 1, 1950 in Oakland, California to Lou Shively. She was a miracle from the start. Born without a sucking reflex, her mother had to raise her on rice cereal from the start. At the age of 5, Kathy contracted polio the same month that the vaccine came to the base her father, Leslie Shively (Les), was stationed at with her family. She was dependent on an Iron Lung until she regained her strength. Years later Les and Lou were given the news that Kathy only had one kidney and it was failing. She was put of the transplant list. While her family and friends started to doubt that she would ever get a kidney, Kathy never lost faith that the lord would provide for her. On July 26, 2015, we received a 1am wakeup call saying that Kathy was getting a kidney, a kidney that she named Cowboy in honor of her love of Westerns and John Wayne. Given that her father was in the Air Force, Kathy was very well traveled. She lived in 6 states and 3 countries outside of the US, including Japan, Okinawa, and the Philippines. One of Kathy’s favorite hobbies was bowling. She could be found competing weekly in her local bowling league. She competed in the Special Olympics for many years in multiple events, often taking home the gold in bowling. Music was also very special to Kathy. Her family spent hours singing every song she knew on their many road trips. She had permanent reserved seating in the front row of her local gospel singing programs. Her greatest love was the Lord and the church she called home, Del City First Church of the Nazarene. Kathy’s faith was something that never wavered, ever growing stronger through all her struggles, and serving as an example to everyone she met. In her final moments she was surrounded by love, fellowship, and song. There is no doubt that she is cruising the heavenly Streets of Gold in her pink Cadillac. She is survived by her father Les Shively of Del City, sister Leslie Robinson of Moore, brother Brian and wife Kemelia Shively of Del City, and numerous nieces and nephews. She is preceded in death by her mother Lou Shively and brother David Shively. The celebration of Kathy’s remarkable life will be held Friday June 28th at 2pm at Del City First Church of the Nazarene, located at 4701 SE 26th Street, Del City, OK. Pastor Vera Radley will be the officiant. The visitation will be held Thursday June 27th at Ford Funeral Services, located at 305 S Sooner Road, Midwest City, OK. In remembrance of Kathy, please consider an offering to your local church or a donation to the United Network for Organ Sharing (UNOS) in her name.

The family of Katherine Shively created this Life Tributes page to make it easy to share your memories.

Send flowers to the Shively family.