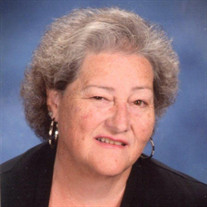 On the morning of October 2, 2020, Kathleen Marie Gordon passed away at home, with family at her side. Kathleen was born in Rome, New York on October 10, 1952 to Kenneth Earl Jacobs and Helene Frances Henry. Growing up with her brothers and sisters, Bonnie, Steven, Kenneth and Lisa. After graduating from Rome Free Academy, Kathleen would go on to marry the love of her life, Floyd Gordon, Jr. The two would be married on July 29th, 1972 in Rome, New York and would spend 48 years together before her passing. Kathleen worked as a Cosmetologist along with different jobs over the years. She ran a daycare from her home in Midwest City, OK and became so close to all the kids as they grew up. Kathleen always wanted to be of help to others. She was awarded with Special Recognition for working 6 weeks at the Oklahoma City bomb site, assisting families, following the Murrah building bombing on April 19, 1995. Kathleen had to sacrifices a lot as a military spouse. Her husband, Floyd, had an extensive career with the military. Kathleen was awarded a Certificate of Appreciation for all that she sacrificed for her country, so her husband could keep up his work with the United States Air Force. This also led to close relationships with other military families. She called those friends, Jim Thomson, Joanne Heald, and Lenora Jurgenson, her brother and sisters as well. Kathleen crocheted hats and blankets for newborn babies. She was always looking for a way to help others. Kathleen loved the Lord and she loved everyone unconditionally. She always put everyone before herself. She was a Mom to many of the children at Crutcho Elementary and Midwest City High School. Three words to remember Kathleen by: Faith, Family and Friends. Kathleen is survived by her husband Floyd Gordon Jr. of Midwest City, OK; son Floyd Gordon III and wife Joan Subia Gordon of Misawa Japan; daughter Deidre Nikole Gordon of Midwest City, OK; grandson Floyd Gordon IV; granddaughter Kria Nichelle Gordon, Hammond, LA; step-grandson John Frederick Esco and James Rai Esco of the Philippines. She is preceded in death by her parents Kenneth and Helene Jacobs; her step-father Mark Humez; granddaughter Kira Nikole Gordon (Ki-Ki); sister Lisa Ruth Haehn (Humez). In lieu of flowers, please consider donating in Kathleen’s honor to Integris Cancer Institute, 5911 W. Memorial, Oklahoma City, OK 73142

On the morning of October 2, 2020, Kathleen Marie Gordon passed away at home, with family at her side. Kathleen was born in Rome, New York on October 10, 1952 to Kenneth Earl Jacobs and Helene Frances Henry. Growing up with her brothers and... View Obituary & Service Information

The family of Kathleen Marie Gordon created this Life Tributes page to make it easy to share your memories.

Send flowers to the Gordon family.