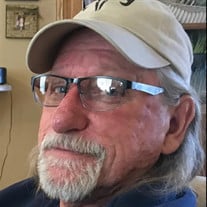 Michael “Keith” Willard, better known as Bub was born on November 5, 1957 and lost a short but courageous fight with cancer on November 5, 2019. It was his 62nd birthday! Keith was born in Lindsay, OK to Mike and Genevieve Willard. He is the baby brother to his sister Susan who is just 11 months older. He lived in Erin Springs until the age of seven and then his family moved to Del City where he graduated from Del City High School in 1976. He worked for Dayton Tire Rubber Company for 25 years until his retirement in 2006. On November 5, 1976, Keith married the love of his life, Cindy Andrews. They made their home in Choctaw, OK. Cindy and Keith have 2 sons, Shane and Shannon and 4 awesome grandchildren, Madison, Hunter, Hanna, & Eli. Keith was an amazing dad and Papa Keith. He was an avid outdoorsman and sports fan! He loved hunting, fishing, golfing, and grilling out! He owned K & S Lawns. He cared for many yards and businesses in the metro area. Keith is survived by his wife, Cindy of 43 years; son Shane & wife Stacy; son, Shannon; grandchildren, Madison & husband Victor Flores, Hunter, Hanna & Eli. He will also be missed by his mother, Genevieve Willard; his mother-in-law, Wanda Andrews; sister, Susan (Jeff) Baker; brother-in-law & sister-in-law, Danny & Karla Griswold; brother-in-law, Timmy Andrews; as well as many other family members and friends. He was preceded in death by his father, Mike Willard. Arrangements are being provided by Ford Funeral Service in Midwest City. Services will be Saturday, November 9, 2019 at Calvary Christian Center, 3900 Epperly Drive, Del City, OK 10:00 am. Burial will be in Arpelar, OK at 3:00 pm.

Michael &#8220;Keith&#8221; Willard, better known as Bub was born on November 5, 1957 and lost a short but courageous fight with cancer on November 5, 2019. It was his 62nd birthday! Keith was born in Lindsay, OK to Mike and Genevieve Willard.... View Obituary & Service Information

The family of Keith Willard created this Life Tributes page to make it easy to share your memories.

Send flowers to the Willard family.