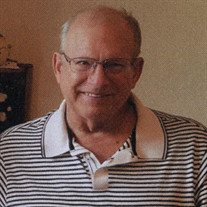 Larry Eugene Millican was born November 6, 1949 in Durant, OK. He went to be with the Lord on September 21st, 2020. Larry graduated from Putnam City High School in 1968, where he lettered in baseball three years of his high school career. He then went on to pitch for Eastern Oklahoma State College on a baseball scholarship, where he received his associate degree in 1970. After college Larry played softball for over 15 years. His passion and talent for the sport allowed him to travel to numerous areas of the country with his young family where he was awarded All-World in the United States Specialty Sports Association (USSSA) and All-American in the Amateur Softball Association (ASA). Larry worked in the meatpacking business for 25 years at Wilson’s, Wickham’s, Canadian Valley, and Bar S. He also enjoyed his time as a service manager at the Doug Gray Chrysler Dodge dealership. Later he owned the H&R Block in Elk City, where he enjoyed being part of the community. Larry’s favorite hobbies were golf and anything to do with cars, including taking long drives in the country. He also loved cooking, especially breakfast, and spending time with his many friends and loved ones. Larry passed away peacefully at Sienna in Midwest City where he leaves behind many devoted friends who serve on the staff. He is preceded in death by his parents Gene and Lela Millican of Choctaw, Bethany, and Atoka. He is survived by five daughters, Meridith Barney and husband Kyle, Bridgett Thurston and husband Tony, Lauren Millican and partner Tyler, Lacey Millican and partner Stephen, and Kelcee Calaway and husband Cadan. He is also survived by two brothers, Barry Millican and his wife Jeanne, and Dennis and his wife Stacey. Larry also leaves behind eight grandchildren, three nephews, a niece, many cousins and countless friends. Visitation will be at Ford Funeral Service in Midwest City on Friday, the 25th, from 9am to 8pm with family present from 5pm to 7pm. Dual funeral services for Larry and his mother Lela Millican will be held at Countryside Baptist Church in Harrah on Saturday, the 26th at 11am, followed by their burial at the Lehigh Cemetery.

Larry Eugene Millican was born November 6, 1949 in Durant, OK. He went to be with the Lord on September 21st, 2020. Larry graduated from Putnam City High School in 1968, where he lettered in baseball three years of his high school career.... View Obituary & Service Information

The family of Larry E. Millican created this Life Tributes page to make it easy to share your memories.

Send flowers to the Millican family.