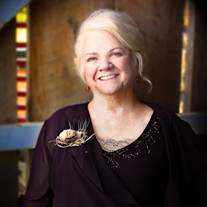 Leah Margaret Topper-Peterson was born of Jack Dixon Topper and Mary Leah Orwig Topper-Howard in Kansas City, MO, on November 14th, 1943. With her children by her side, Leah entered Heaven’s gates on November 6th, 2021, in Hot Springs, AR. In 1952, her father decided to move the family to rural Lee’s Summit, on 5 acres. It was there that Leah developed her love for horses, chickens, and gardening. She told the story of having such a deep love of horsemanship that she took off on a neighbor’s horse and just kept riding away from everyone instead of returning in the time limit. Leah was the third born of eight children and was surely in love with her parents but had a strong bond with her father. They would go fishing on many occasions. She related that to be anywhere near her dad was her ultimate joy. She had a lifetime love of fishing and told many stories about her dad that were so very special to her. She was 11 years old when her father passed away but continued to relate the stories of him that she held in her heart to anyone who wanted to listen. It was a childhood of many losses and heartaches, as she lost her baby brother Richard “Dickie” in 1958 to drowning. Her mother was a stalwart example of pulling up the bootstraps in hard times and making do with what had been provided. The amount of wisdom her mother imparted by example, undoubtedly resulted in forming the strength and courage Leah had when going through her own challenges in life. Leah was a lover of all animals, and she always had a dog by her side. Leah married Frank “Pete” Peterson on May 9th, 1978, in Ada, Oklahoma. They shared over 22 years of marriage together — their marriage was unique in that they were the perfect match for each other. Pete was the love of Leah’s life — they had a bond that transcended time and they kept their vows to each other as they raised five children. Her children are the recipients of their mother’s strong countenance, tenacity, hard work, stubbornness, and high level of morality that Leah insisted her children hold themselves accountable for in their own lives. As is revealed in their lives today, Leah raised her children to be the utmost examples. Although they are humble, they are the successful product of one little, but mighty woman, whose love for them never waned. We know Leah must have been at peace that all her children live their lives with faith in God -- which was her number one focus in life. Leah worked for and retired from the Oklahoma State Health Department. She truly enjoyed helping people and took great pride in her career. Leah was also a faithful woman who loved the Lord, her family, and church. Leah had a zeal for life and nature. She loved the treed countryside -- the more trees the better. She no doubt lived her adult life intertwined with much the same activities as when she was young. She was a very supportive sister to all her siblings, and though she had an extremely poor life after her dad’s passing, there were endless amounts of fun and frolic amongst her and the siblings. With every hard lesson won by her childhood, her children no doubt inherited her tenacity, and her children got to see that played out in their upbringing as well. Leah is survived by daughter Lisa Anderson and husband Don of Fittstown, OK; son Keith Dunn of Alexander, AR; daughter Karen Findley and husband Brent of Newalla, OK; son David Dunn and wife Megan of Lonsdale, AR; son Kevin Dunn and wife Kim of Arcadia, OK; sister Jacquelyn Rice and husband Larry of Burlington, KS; sister Mary Ann Burridge of Timnath, CO; Jack Topper and wife Laura “Jan” of Cascade, MT; Nancy Topper-Yancey and husband Steve of Pueblo West, CO; John Topper of Springdale, AR; several grandchildren, great-grandchildren, nieces, nephews, and her German Shepherd, Merlin. Leah is preceded in death by her husband, Frank “Pete” Peterson; her parents, Jack Dixon Topper and Mary Leah Orwig Topper-Howard; two brothers, Bernard “Barney” and Richard “Dickie” Topper; and a son-in-law Randall Phillips. She was everything to everyone. Her master replied, “Well done, thy good and faithful servant”, Leah Margaret Topper-Peterson. Matthew 25:23 Friends and family may gather at Ford Funeral Service in Midwest City, OK on Thursday, November 11th at 6:00pm. The funeral mass will be held at Sacred Heart Catholic Church in Oklahoma City, OK on Friday, November 12th at 10:00am. Burial will be afterwards at the Sunnylane Cemetery in Del City, OK.

The family of Leah Margaret Peterson created this Life Tributes page to make it easy to share your memories.

Leah Margaret Topper-Peterson was born of Jack Dixon Topper and...

Send flowers to the Peterson family.