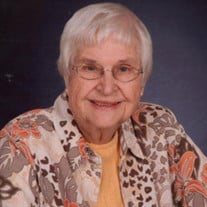 Millican Lela M. of Harrah, formerly of Choctaw, Bethany, and Atoka, ascended to heaven on September 14,2020 after passing peacefully in her sleep. Lela was born October 21,1926, to Will and Bertha Harris near Lehigh, OK in the farming community of Grasshopper. She was raised with five older brothers who developed a special bond with their baby sis. Lela graduated from Coalgate HS after her parents relocated to a home that was near a school bus route. She valued education. After working at several jobs during her career, she retired from the city of Bethany where she had established several long-standing friendships. Lela wrote that her main vocational interests were being a wife, mother, and a homemaker. For 25 years during her golden years, she did volunteer work at the Harrah Senior Center which became a home away from home. Lela was preceded in death by her five brothers and Gene Millican, her loving husband of 43 years. Although she is survived by her three sons and their families, her eldest son Larry Millican passed soon after Lela. Larry’s daughters and their spouses are Meredith Barney (Kyle) of Canton, Bridgett Thurston (Tony) of San Jose, CA, Lauren Millican (Tyler) of Merritt, and Lacey Millican (Stephen) of Cornish, New Hampshire, Kelcee Calaway (Caden) of Elk City. Lela’s surviving middle son is Barry Millican (Jeanne) of OKC and their sons Derick Millican (Jodie) of Mustang and Isaac Millican (Kristen) of Moore. Her youngest son is Dennis Millican (Stacey) of Grove and their children Lindsey Millican of Grove and Kyle Millican (Samantha) of The Village. Lela also leaves behind fourteen great grandchildren, many nieces, nephews, cousins, and friends. Mom wrote, “Remember me for my love, lemon pie, and dill pickles.”. Visitation will be at Ford Funeral Service in Midwest City on Friday, the 25th, from 9am to 8pm with family present from 5pm to 7pm. Dual funeral services for Lela and her son Larry Millican will be held at Countryside Baptist Church in Harrah on Saturday, the 26th at 11am, followed by their burial at the Lehigh Cemetery.

Millican Lela M. of Harrah, formerly of Choctaw, Bethany, and Atoka, ascended to heaven on September 14,2020 after passing peacefully in her sleep. Lela was born October 21,1926, to Will and Bertha Harris near Lehigh, OK in the farming community... View Obituary & Service Information

The family of Lela Mae Millican created this Life Tributes page to make it easy to share your memories.

Millican Lela M. of Harrah, formerly of Choctaw, Bethany, and...

Send flowers to the Millican family.