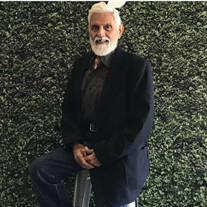 Leon Ray Leal, went home to be with his beloved Lord Thursday, October 14, 2021. He was born in Anadarko, Oklahoma to Frank and Lenora Leal on March 14, 1939, and raised in Oklahoma City at St. Joseph’s orphanage. Together with Rosa Cruz, he had six children Michael Leal, Frances Sandine, Noel Leal, Leon Leal, Valentina Mares, and Deborah Leal; Leon was met in heaven by his parents, sisters Carmel and Suzanne, brothers Johnny, Frank Jr. and Al, son Michael R. Leal, Grandson Matthew Featherston, and Son-in-law Keith Sandine. Left to cherish his memory are his siblings Wydolla Brantley, Aurthur Leal, and Francis Newman; five of his children, son Leon and Tracy Leal of Grapevine, TX; daughter Frances Sandine of Pine Bluff, Arkansas; son Noel and Kristi Leal of Edmond, OK; Daughter Valentina and Julio Mares of Oklahoma City, OK; and daughter Deborah and Tish Leal of Edmond, OK; his 15 grandchildren Christopher and Brandi Leal, Cody and Stormi Risner, Amanda Leal, Olivia Leal, Christina Featherston, Marshall Featherston, Lindsey Robinson, Michael and Jessica Leal, Amber and Parker Lotspeich, Jacob and Kaitlyn Leal, Joshua Leal, Joseph Leal, Otilia Mares, and Andrew Mares; 18 greatgrandchildren Justice Leal, Adrian Leal, Christian Leal, Brady Leal, Levi Risner, Gracie Risner, Charlotte Duncan, Wyatt Duncan, Cheyanna Featherston, Lilly Featherston, Lucy Featherston, Mason Featherston, Garrett Hampton, Tucker Robinson, Zelda Leal, Millie Leal, Silas Lotspeich, and Benjamin Mares; many, many nieces and nephews; his love and best friend Connie Beaver, and her family Justin Beaver, Michael and Deatra Beaver, Dakota and Brittany Lewallen, Keeton Beaver, and Jalen Beaver. Leon joined the United States Air Force at age 18 and proudly served his country for four years. Working in many different jobs over the years, he retired in 2000 after 19 years of service from the Oklahoma DHS office as a social worker. He then went on to complete his bachelor’s degree at the University of Oklahoma. For 26 years, Leon’s roots were planted in Binger, Oklahoma. When he was home, he was busy making stained glass and taking photos. However, he was often on the road with Connie Beaver, whom he shared a loving relationship for 40 happy years. Both avid skiers, they were found on the slopes of Crested Butte every Spring Break – Leon’s last ski runs being blue diamonds at age 78. A man who never met a stranger, Leon was an independent, charismatic, adventure seeking man whose main goal in life was making others laugh. Passionate about the game of chess, he once was one of several in a match against Bobby Fischer. Leon never turned down a competition of any type; earning himself State Champion titles in jalapeno eating (65 jalapenos) and watermelon seed spitting. Leon also won a dancing competition during a Thunder basketball game. Leon devoted his life to volunteering – Pancakes on the Plaza in New Mexico every 4th of July since 1997, 52 units of blood (6.5 gallons) donations, 326 volunteer hours for the Oklahoma Blood Institute, Director of Red Earth as Artist Hospitality Chair, March of Dimes, and an infamous two months spent in Salt Lake City at the 2002 Winter Olympics. He gave hours to his church and housed several different foreign exchange students, family members, and numerous friends who needed help over the years. Anyone close to him, knew his love of sports – cheering on the Sooners every chance he could. He also held season tickets for the Thunder since the team arrived in Oklahoma. Although his presence on Earth will be deeply missed, his legends will continue to live through the memories of family and friends. His quirky dance moves, playful manner, and beloved toothless smile will be with us always. Leon is now at peace and free of all pain – he is with his Lord.

Leon Ray Leal, went home to be with his beloved Lord Thursday, October 14, 2021. He was born in Anadarko, Oklahoma to Frank and Lenora Leal on March 14, 1939, and raised in Oklahoma City at St. Joseph&#8217;s orphanage. Together with Rosa Cruz,... View Obituary & Service Information

The family of Leon Ray Leal created this Life Tributes page to make it easy to share your memories.

Leon Ray Leal, went home to be with his beloved Lord Thursday,...

Send flowers to the Leal family.