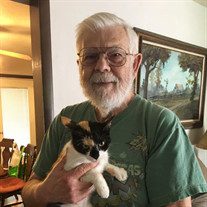 Leslie Eugene Shively, 88 years old, resident of Del City, Oklahoma breathed his last breath Monday, May 10, 2021 in Oklahoma City, Oklahoma. Les was born in New Boston, Ohio to Clara Pearl Shively whom he found it in his heart to forgive, though not forget, for giving away his comic collection when he left home. Not everyone knows, but Les learned to drive on the twisting country roads of southern Ohio running moonshine for his Uncle Emory. These skills helped him navigate the numerous distinct thoroughfares in the places at which the Air Force stationed him. He enlisted in the Air Force in the fall of 1952. He married LouVee Ponder January 11, 1956. Together they raised four children and, at different times, his brothers, nieces, nephews, grandkids, and great grandkids. While in the Air Force he was lucky enough to bring his family to his major deployments overseas to Japan, Okinawa, and the Phillipines. When stationed in Colorado, his son, David, wanted to join the Boy Scouts. The only problem was that there was no troop in is area. Les started one. He retired from the service New Year’s Eve 1972. He then went right to work at Luke Air Force Base in Arizona doing the same job for, let’s just say, a lot more money. While working full time, he earned his Bachelor in Science degree at Grand Canyon College in 1977. In 1978 he moved the family to Oklahoma and went to work for Raytheon at Tinker and Shepherd Air Force bases before retiring. He coached little league baseball, taught Sunday School, and sat on the church board for years. He called Del City First Church of the Nazarene his church home since 1978. He was a magnet for strays, the dog and cat kind, as well as humans. It was not unusual for him to help people down on their luck by buying them a meal or even a bus ticket home. In fact, while on vacation in California in 1995, he was almost certain that he bought the Unabomber a hamburger. In the 1990s he was distracted by hunting Beanie Babies “for Mom.” But his true passions were coin collecting and comic books. At last count he had almost 17,000 comic books. He is survived by daughter, Leslie Ann Robinson and son Brian Eugene Shively and his wife Kemelia, his grandchildren James Shively, Tammy Montgomery, Harold Shively, Robbie Harden, Amanda Hinspeter, and Tyler Magruder, great grandchildren Kaisha McCormick, Emily Montgomery-McCormick, Shaelynn Montgomery, Georgia Montgomery, Eleanor Hinspeter, and Josephine Hinspeter, Brothers Vernon and Raymond Shively, several in-laws, outlaws, nieces, nephews and other various and sundry friends and chosen family, and one cat, Callie. He is preceded in death by his wife, Lou Shively (2016), daughter Katherine Shively (2019), and son David Shively (1988).

Leslie Eugene Shively, 88 years old, resident of Del City, Oklahoma breathed his last breath Monday, May 10, 2021 in Oklahoma City, Oklahoma. Les was born in New Boston, Ohio to Clara Pearl Shively whom he found it in his heart to forgive, though... View Obituary & Service Information

The family of Leslie Eugene Shively created this Life Tributes page to make it easy to share your memories.

Send flowers to the Shively family.