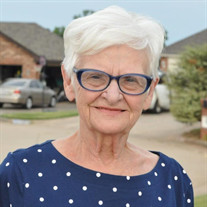 Linda Faye Crites (Grammy), age 78, of Midwest City, Oklahoma, was called home on Wednesday morning, December 29, 2021 peacefully in her home surrounded by family. Linda was born on May 26, 1943 in Hoyt, Oklahoma to Arval and Wanda Holdridge. She graduated from Stigler High School in 1962 and shortly after moved to Oklahoma City. After moving to the city, her first job was at a drug store serving soda. She met Jim in January of 1964 at the Bixler drive-in restaurant, and they married in the summer of that same year. They had their son, Todd, in 1965. Shortly after, she began working for Boydston Insurance in 1966. Their daughter, Stacy, was born in 1972. Linda retired from Boydston Insurance after a 30 year career. In 1996, she began working at Dillard’s Department Store where she continued working for 25 years until her passing. Linda “Grammy” Crites was the embodiment of grace and class. She placed love and pride in family above all else. Linda was dedicated to her career at Dillard’s and her fashion expertise left a lasting impact on her customers. Rarely did anyone leave her home without something she gifted them. Linda would tell anyone willing to listen about how proud she was of her family. She was the most stylish person in any room but she would trade every dress and piece of jewelry for an hour with her grandkids. In Linda’s final days, she gifted the special women in her life a watch. Now, all they wish is for their watches to roll back time to have just one more day with her. She is survived by her son Todd Crites and wife Wendi of Haslet, TX, daughter Stacy Willard and husband Shane of Midwest City, OK, grandchildren Justin Loveless and wife Sarah of Lubbock, TX, Jacob Loveless and wife Marideth of Fort Worth, TX, Madison Flores and husband Victor of San Diego, CA, Kennedy Crites of Haslet, TX, Hunter Willard of Midwest City, OK, great grandchildren Cooper Loveless, Hank Loveless, Maverick Loveless and Sunny Loveless, step-mother Jo Holdridge, sister Lola Fletcher and husband Tommy, Lana Huggins and husband Carroll, and a host of nieces and nephews whom she adored, Jim Crites, ex-husband, father of her children and a dear friend. She was preceded in death by her mother Wanda Gordon and father Arval Holdridge.

Linda Faye Crites (Grammy), age 78, of Midwest City, Oklahoma, was called home on Wednesday morning, December 29, 2021 peacefully in her home surrounded by family. Linda was born on May 26, 1943 in Hoyt, Oklahoma to Arval and Wanda Holdridge.... View Obituary & Service Information

The family of Linda Faye Crites created this Life Tributes page to make it easy to share your memories.

Send flowers to the Crites family.