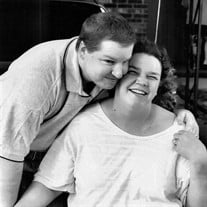 Lori Meachum Woolard, age 52, passed away in her sleep on December 21, 2020, in Oklahoma City, Oklahoma. She was born October 27, 1968, in Durham, North Carolina, to Evelyn and Larry Meachum as the youngest of 4 children. Lori will be fondly remembered by family and friends as a loving friend, mother and wife. She was a fan of using humor and wit to entertain those around her, keeping everyone on their toes. After graduating high school from Putnam City North, Lori worked her way up from a bank teller into a prime accounting job with a company in Edmond, Oklahoma. In March, 2004, Lori married Kevin Woolard, in a beautiful ceremony in Oklahoma City. In 2005, Lori was diagnosed with Primary Progressive Multiple Sclerosis, which over time had a crippling effect on her body but not on her personality and wit. Lori retired early at the age of 41 due to her condition. Lori amazed her doctors, friends and family with how resilient and positive she remained through the hardships she endured. She let MS know she was a force to be reckoned with. The joys of her life were being married to Kevin, who was phenomenal in the love and care he provided throughout the remainder of their marriage; Joanna, who she adored with all her heart and who she was extremely proud of; and the many talks Lori enjoyed with her Dad as she and he both dealt with life ending illnesses. Lori is survived by her husband, Charles Kevin Woolard; daughter, Joanna Meachum (fiance, Kale); mother, Evelyn Meachum; and siblings, Darrell Meachum (wife, Cathy), Cheryl Heidebrecht (husband, Lynn); nephew, Tyler Heidebrecht (wife, Jana); 2 great nephews, Isaac and A.J. Heidebrecht and 1 great niece, Kierra Heidebrecht, along with several aunts and uncles, many cousins and friends. She is predeceased by her father, Larry Meachum; brother, Larry Ray Meachum II, several aunts, uncles and cousins. A special thank you is given to Linda, her personal aid, who was far more to her than a personal aid. She was a bright light in Lori’s last months who cared for her with grace, patience and tenderness. But more than that, she was a friend to Lori, and we are so grateful for that role she played in her life. In lieu of flowers, please make memorial contributions to the National Multiple Sclerosis Society in Lori’s honor.

Lori Meachum Woolard, age 52, passed away in her sleep on December 21, 2020, in Oklahoma City, Oklahoma. She was born October 27, 1968, in Durham, North Carolina, to Evelyn and Larry Meachum as the youngest of 4 children. Lori will be fondly... View Obituary & Service Information

The family of Lori Meachum Woolard created this Life Tributes page to make it easy to share your memories.

Lori Meachum Woolard, age 52, passed away in her sleep on December...

Send flowers to the Woolard family.