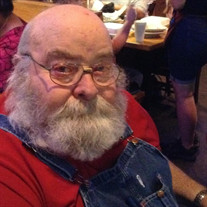 Loyed Wayne King, a resident of McLoud, Oklahoma, went to be with his Creator on February 1, 2022, at the age of 75. Loyed was born August 18, 1946, to George Loyed King and Ruby (Arnold) King in Oklahoma City, Oklahoma. His parents moved around for a while, then settled in Oklahoma City. At the young age at 14, he met his sweetheart, Willene McCoy. They started to date, just before his 16th birthday, and were married nine days after his 18th birthday. Loyed and Willene were married for 57 years. Loyed is survived by his wife, Willene King; son Larry Wayne King; daughter, Deborah Elaine (King) McKerley; son, Jerry Duane King and his wife, Tammy; grandchildren, Michael and Emily McKerley; brother, Paul David King and wife Robbie; brother, Jerry Stephen King and wife Cindi. He is preceded in death by his parents, George Loyed King and Ruby King; sister, Ruby McCray; and brother, Jimmy King. Loyed’s love for music started at the age of six. His mother would sit him in the middle of the bed and let him play the guitar. She showed him how to chord, then with God’s guidance, watching and listening to others play, he became a great guitar player, anointed by God. Loyed played with several gospel groups, traveling around Oklahoma for a while, but always had a home church to play in. He tested different instruments, but the guitar was his love. Loyed kept his wife and children in church, taught them to love God and to pay tithes. Loyed’s love for music was passed on to his children and grandchildren. He would also teach other young people how to start playing the guitar. A lot of them went on to be good musicians. Loyed loved God with all his heart. He was a joyful and fun-loving man. He was always asking people if they went to church and knew Jesus. He was not bashful about telling them what God could do for them. He will be greatly missed, but we know he doesn’t hurt anymore.

Loyed Wayne King, a resident of McLoud, Oklahoma, went to be with his Creator on February 1, 2022, at the age of 75. Loyed was born August 18, 1946, to George Loyed King and Ruby (Arnold) King in Oklahoma City, Oklahoma. His parents moved around... View Obituary & Service Information

The family of Loyed Wayne King created this Life Tributes page to make it easy to share your memories.

Loyed Wayne King, a resident of McLoud, Oklahoma, went to be...

Send flowers to the King family.