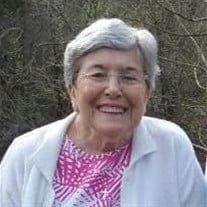 Margaret Maxine McAfee, 85, of Del City, OK passed away January 13th, 2020 at her home. She was born on May 31, 1934 to Ernest and Naomia Meadows of Sedan, KS. She married Herold Kent McAfee, also of Sedan, on February 14, 1954, at the First United Methodist Church of Sedan after a whirlwind romance that began at the Ellen Woods Café in Sedan while Kent was in the Air Force. They were blessed with their first child, Melody, on November 16, 1954, and a son, David, on January 20, 1958. Kent and Marge made Del City their home. Kent retired from the Federal Aviation Administration after 30 years, and Margaret retired as Vice-President of Liberty National Bank for over 20 years. They were active members of Sunnylane United Methodist Church in Del City where Margaret served for several years as President of the UMW and later, for several years as a member of the Care Team ministry. In addition to her family and church life, Margaret enjoyed playing golf after her retirement. She frequently played in local golf tournaments, winning several. The last one and a half years of her life were spent at Wellington Parke Assisted Living Center in Del City. Margaret is survived by a sister, Charlene Chamberlin and her husband Bob of Rogers, AR¬; a brother, Charles Meadows and his wife Jane of Sedan, KS; a daughter, Melody Ann Walke of Norman; a son, David Paul McAfee and his wife Paula of Del City; a grandson, Devon Walke and his wife Jennifer of Oklahoma City; and a granddaughter, Maliah Wilson and her husband Kyle of Houston, TX. Margaret was a shining example of Christian love and service during her walk through this world. Her laugh was contagious - it was real and from the heart. She will be greatly missed by her family and many friends who loved her so dearly. In lieu of flowers, please make donations to the Care Ministry at Sunnylane UMC in Del City, OK.

The family of Margaret Maxine McAfee created this Life Tributes page to make it easy to share your memories.

Send flowers to the McAfee family.