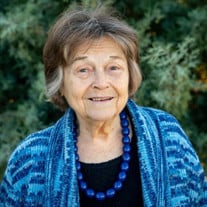 Marian Ralene Martin, 84, of Oklahoma City passed away peacefully at Mercy Hospital on December 30, 2021. Ralene was born January 24, 1937, in Oklahoma City to Chester Marion and Eva Rose (Miller) Eakins. She attended schools in Bethany, Moore and other communities surrounding Oklahoma City, wherever her father was pastoring at the time. On June 27, 1954, she married Valjien Martin in Wheatland, Oklahoma. Having just married a US Marine, she began her journey around the world in New Orleans. After a transfer to the US Air Force, they continued to South Dakota, Altus, Oklahoma, several years in France and back to Oklahoma to include Enid, Bethany (while Val deployed to Vietnam) and finally Midwest City. She finished her high school education while living in New Orleans. Ralene was a military wife and homemaker. Her life’s work was her sons! She enjoyed shopping and crafts, but most of all enjoyed spending time with her family and friends. She loved music, singing in church choirs, and playing piano for various churches she attended. Most people knew her as either Ralene or Penny, a nickname given by her father because of her beautiful red hair. Ralene is survived by her sons Adrian and his wife Patti, Vance and his wife Wanda, and Brian and his wife Leanna. Grandsons are Jonathan, Benjamin, Zachary, Nathaniel, and Thomas. There are five great grandchildren. She was preceded in death by her parents, her husband and two sons, Blaine Jay and Darin Rajien, and her brother, Richard Eakins. In lieu of flowers the family would please like you to consider making a donation to: https://www.globaloutreach.org/giving/missionary-details/andrew-and-lori-spurgeon

The family of Marian Ralene Martin created this Life Tributes page to make it easy to share your memories.

Send flowers to the Martin family.