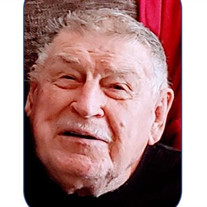 Marion Wayne Deen Hopper went home to be with all those that went before him on December 8, 2020 at the age of 87. Wayne was born on July 12, 1933. Wayne retired from the United States Air Force in 1975 after 20 years of Service as a Staff Sargent. During his service he was stationed in the Philippines and Vietnam during the Vietnam War and Turkey during the Cuba Missile Crisis. He was also stationed in the United States in the States of Texas, California and Oklahoma. Wayne married the love of his life Donna Irene Hopper on March 31, 1956 in San Angelo, Texas. Together they lived in Texas, Turkey, California and then finally settled in Newalla, Oklahoma for 15 years. They then relocated to a home in Midwest City which would be their home base for 24 years. After Donna’s death in 2012 Wayne traveled visiting family in Oklahoma and Texas. After a major illness Wayne decided to move into an assisted living facility. After many tours and visitation to several locations he settled at Copperlake Estates in Edmond Oklahoma. There was a lake to fish, a sidewalk all the way around the lake and a club house for family to enjoy for the Holidays. The apartment that he chose had a view of the lake and gazebo. Wayne made many friends at Copperlake through the 5 years he was there. After retirement Wayne worked for a contractor installing signal lights throughout the State of Oklahoma, but after several years of working outside in the weather he decided that he wanted to go back to school to learn a trade. He went to Gordon Cooper Vo-tech in Shawnee, Oklahoma for plumbing and upholstery. During this time Wayne and Donna were Amway Distributors and traveled throughout Oklahoma and the surrounding States, even going to Hawaii for an Amway Conference. Wayne then decided to go through CLEET and obtain a Security Guard License and worked many different locations, from Crest Foods in Midwest City to Apartment Complexes in Norman. It would be after Donna totally retired from nursing that together they would go on the road and work Security for an Oil Company. They were responsible for recording all visitors that came onto a drilling site. This could be an active well but most of the times it was a well that was being taken down and moved. Donna said, “you could step out the door into a cow patty if you were not careful.” During this time they lived in Zapata, Texas in a travel trailer, then move onto a site in their motorhome. Wayne was preceded in death by his beloved wife Donna, his mother, father, sisters, brother and daughter Donna Kay Hopper. He is survived by his brother in law Richard Wade Dean of Kermit, Texas. Son, Michael Wayne Hopper and wife Teresa of Oklahoma City. Grandson Zachary Alan Parr and wife Amber, great grandchildren Kaleb Cole McVey, Logan Ray Roach, Timberlyn Marie, Gage Alan, Aleah Rain and Gabriel Alan Parr of Oklahoma City. Granddaughter Annie Rachel Marie Sanders and husband Donald II, great grandchildren Davion, Desiree, Donald Sanders III, Tanner and Brian Parr. Daughter, Kathryn Lea Foley and husband Chuck of Edmond, Oklahoma. Granddaughter Melissa Ann Chevere’, great grandchildren Isaiah Daniel, Isabella Renee and Anne Elise Victoria Chevere of Tecumseh, Oklahoma. Granddaughter Halie Dawn Alcorn and husband Dan of Alex, Oklahoma. Great grandchildren Brayley Madison Rayne and Jaidyn Hadley Reese DeWitt, Aeralie Emma Hayes and Lillie Kaye Alcorn. Son, Joseph Wade Hopper and wife Kelly of Wilburton, Oklahoma. Grandchildren Cory Shane Hopper and wife Breanna of Norman, Oklahoma. Great grandchild Logan Shane Hopper. Shawn Douglas Hopper of Clarksville, Tennessee. Nicole Sherrie Hopper and wife Leann of Bokoshe, Oklahoma. Christopher Jahiel Wayne Hopper and Ethan Alexander Nolan. Son, Jimmie Green and wife Nancy of Harrah, Oklahoma. Grandson Paul Kinman of Tulsa, Oklahoma. Great grandchildren Luciana Marie and Lincoln Paul Kinman. Grandson, Josh Green and wife Amy of Choctaw, Oklahoma. Granddaughter Hannah Dye and husband Cory of Charlotte SC, great grandson Max Howard Dye. The family would like to send a special Thank you to the Staff at Copperlake Estates (Lyndale Estates) that took care of my father in the past. Leah Park, Monica Smith, Stephanie Burleson, Star, Kim Nightengale and so many others. We would also like to say Thank you to the staff at Bradford Village that took care of my father. I had the privilege to meet these courageous individuals that are dealing with staffing shortage as well as end of life care for many families not just our own. From the moment I was allowed inside to be with my Dad, they were there answering my million questions, making sure that Dad was comfortable and that I didn’t need anything. They traveled this journey with me every step of the way. I can never say Thank You enough. May God Bless you all and keep you safe. My final Thank You goes to Kim Nightengale with Kindful Hospice OKC for being that extra set of hands in helping take care of my father.

Marion Wayne Deen Hopper went home to be with all those that went before him on December 8, 2020 at the age of 87. Wayne was born on July 12, 1933. Wayne retired from the United States Air Force in 1975 after 20 years of Service as a Staff... View Obituary & Service Information

The family of Marion Wayne Deen Hopper created this Life Tributes page to make it easy to share your memories.

Marion Wayne Deen Hopper went home to be with all those that...

Send flowers to the Hopper family.