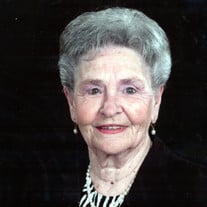 Marie “Re Re” Lea passed away peacefully the morning of Wednesday September 8, 2021, with the love of her family surrounding her. Marie was born in Yeager, Oklahoma on September 1, 1927 to Lois and Homer Alexander. Early in her childhood her family moved to Non, Oklahoma. She attended Gerty High School, where she was a star athlete and took her basketball team to the state tournament in 1945. Soon after graduation, her family moved to Seminole where she met John Lea, the love of her life while she was working at the Union Bus Station. They married July 6, 1946 and had two beautiful daughters, which they raised in Del City, Oklahoma. After John passed in 1962, to provide for her family, Marie started banking school and began her career at Citizens National Bank. She retired as an Officer of the Gold Dome in 1989. Marie was an avid sports fan and rarely missed watching or attending a game. She loved her Sooners, Thunder, and Braves but mostly she loved supporting her kids and grandkids’ teams. She was well known and could always be heard “cheering”. She also loved holidays and playing cards with family. Marie loved her family and friends and even in her later years struggling with dementia, she never let anyone leave her home without a personalized picture she had colored. She was a precious, giving soul that taught us all to live, laugh, love. She will be dearly missed by her daughters Donna and Richard Eckel, Brenda and David Weaver; grandchildren, Gindi and Bray Vincent, Lea Brite Hyde, John David and Christi Weaver, John C. (Butch) and Dawnyelle Hyde, Caleb Eckel, Lea Anne and Danny Bumb; Great Grandchildren, Tenley Hyde, Brendon Bumb, Ashlyn Hyde, Camden Hensley, Samantha Bumb, Carter Hensley, Sam Vincent, Lillie Vincent, Will Vincent, Jack David Weaver; brothers, Arlen Alexander, Howard Sumner; and numerous nieces, nephews. She was preceded in death by her loving husband John Lea; parents Lois and Homer Alexander; siblings, Bernice Alexander, Lavon Jones, Juanita Hudson, Lee Alexander, Arvel Alexander. A viewing will be held at Ford Funeral Home Friday, September 10 from 9:00am-8:00pm with family present from 5:00-7:00pm. The celebration of life will be held at Candlewood Chapel (Ford Funeral Chapel) Saturday, September 11, at 10:00am.

Marie &#8220;Re Re&#8221; Lea passed away peacefully the morning of Wednesday September 8, 2021, with the love of her family surrounding her. Marie was born in Yeager, Oklahoma on September 1, 1927 to Lois and Homer Alexander. Early in her childhood... View Obituary & Service Information

The family of Marion Marie Lea created this Life Tributes page to make it easy to share your memories.

Marie “Re Re” Lea passed away peacefully the morning of Wednesday...

Send flowers to the Lea family.