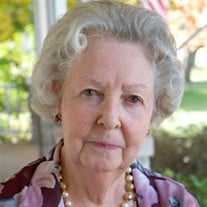 Marna Imogene “Jean” Ruiz (Beard), 97, of Midwest City, Oklahoma, passed away on October 31, 2020, in Norman, Oklahoma, two days shy of her 98th birthday. Jean was born on the family farm in Mayfield, Oklahoma, to Nina Dell (Gray) and Thomas Jefferson Beard on November 2, 1922. She was raised in a home hand-built by her father. She learned the value of hard work at a young age through her hours of work in the field picking cotton on her family farm. She was raised in a deeply religious family who attended the Sayre Church of Christ, providing her with the Christian foundation she carried throughout her life. She attended nearby Sweetwater High School where she joined the track team as a star athlete, winning multiple track awards. After graduating high school in 1941, she moved to Oklahoma City to attend Blackwood-Davis Business College and later started her first professional job at Periodical Publishing Company in Oklahoma City. Jean met her future husband, Felix Zamora Ruiz, Jr., while Felix attended military training at nearby Cimarron Field, Oklahoma. She later married Second Lieutenant Ruiz on October 5, 1944 in San Antonio, Texas. She faithfully supported his career as a military pilot as he served away from home in multiple wars and countries. Jean was a loving mother and the ultimate homemaker to their two wonderful children, Ronald (Ronnie) and Brenda. They happily served as a military family throughout the United States and even the Panama Canal Zone. “Nana Jean” was most known for her kind personality, delicious home-cooked meals, and being a wonderful and loving mother, wife, grandmother, great-grandmother, aunt. daughter, sister and friend. She always welcomed guests to her table filled with her home cooking and no less than three desserts. Her chocolate pie was famous and a family favorite. No one ever left her house hungry! Jean was active at Eastside Church of Christ, Midwest City, OK, and for years worked with her brothers and sisters in Christ printing and mailing the weekly bulletin. She shared her skills as an expert seamstress, chef, and faithful Christian servant to her two children, six grandchildren, and nine great-grandchildren. When she wasn’t spending time with friends and family, she kept herself busy reading, sewing, crocheting, completing puzzles, and tending her flower garden. Jean is preceded in death by her parents, Thomas and Nina; her husband, Felix; her siblings, Lorraine Phillips, Erma Macklin, Allen Beard, Orville Beard, Ewing Beard, and Blanche Thomas; her son, Ronnie; and her granddaughter, Lisa. Jean is survived by her daughter, Brenda Williams and husband, Douglas, her grandchildren, Danny Ruiz; Julie Gaulin and husband Eric; Kristy Steenberge and husband, Greg; Amy Cordova and husband, Jason; and Jason Williams; her great-grandchildren, Cooper, Isabella, Sydney, Hailey, Mason, Trigg, Calen, Jake, and Allie; nephew, Rodney Beard; nieces Patricia Martin and Kaye Bratton; and her daughter-in-law, Susan Bussard. Arrangements are being made by Ford Funeral Home, 305 South Sooner Road, Del City, Oklahoma, 73115. Viewing will be available on Friday, November 6, from 9:00 am until 8:00 pm. Funeral services will be held at 2:00 pm, Saturday, November 7th, at Eastside Church of Christ, 916 South Douglas Boulevard, Midwest City, Oklahoma, 73130. Dale Hartman of the North MacArthur Church of Christ, Oklahoma City, Oklahoma, will officiate. Burial will follow at Arlington Memory Gardens, 3400 North Midwest Boulevard, Oklahoma City, Oklahoma, 73141.

The family of Marna Imogene Ruiz created this Life Tributes page to make it easy to share your memories.

Send flowers to the Ruiz family.