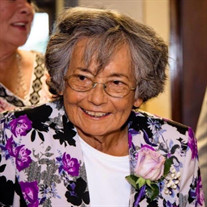 Martha Helen Primeaux was born in Muskogee Oklahoma in a small rural farming community. She was the first in her family to receive a college degree. She was married in 1950 to Roswell Jim Primeaux and everyone in her family called him Primeaux. He preceded her in death and now and forever they will be together. Martha is survived by her children, Charles Morgan Primeaux and Vicki Ann Sykes; two grandchildren, Justin Sykes and Tiffny Thurman and husband Michael Thurman; three great grandchildren, Ethan Sykes, Ava Sykes and Kash Sykes. Also, a sister Peggy Liles. She had 3 brothers and 2 sisters that also preceded her in death. She loved to walk, for many years she walked with a friend and neighbor. They walked a 3-mile path around the neighborhood. And until and 6 months ago she was walking with her walker about a mile 3 times a week. She was a strong-willed woman until the end. Martha H. Primeaux, was a coordinator of volunteers for Hospice Quality Care and entered the nursing field by accident. "My major was special education, but I was needing an elective, so I enrolled in History of Nursing and fell in love," Primeaux said. And the rest, as they say, is history. Martha Primeaux received her bachelor's degree from the University of Oklahoma in 1963. She was a staff nurse, then head nurse, for Children's Hospital for four years before receiving her master's from the University of Colorado. She then began her career at OU as an assistant professor of nursing. When she retired from teaching more than 25 years later, she was associate dean and director of educational programs. Primeaux, a professor emeritus, began working as a volunteer coordinator for Hospice Quality Care in January 2002. She also volunteered her time at the same hospice to sit with terminally ill patients. In addition, she visited patients in two local nursing homes two to three times a month. Martha Primeaux was a co-author of two books with Dr. George Henderson -- Transcultural Health Care and Monitoring Patients in Health and Illness. She also has had numerous articles published in professional nursing journals and contributed to several nursing texts. She had remained active in the American Nurses' Association, Oklahoma Nurses' Association, University of Oklahoma Alumni Association, Sigma Theta Tau Beta Delta Chapter Honorary Society of Nursing and is the founder and charter member of the American Indian/Alaskan Native Nurses' Association. She also volunteered with the National Indian Education Association. Her civic and nonprofit affiliations include donating her time with the Central Oklahoma Chapter of Zonta International, a service organization of business and professional women, and the Oklahoma Department of Human Services Department of Aging's Older Women Initiative. She was loved by the many people she touched during her lifetime and she will be greatly missed.

Martha Helen Primeaux was born in Muskogee Oklahoma in a small rural farming community. She was the first in her family to receive a college degree. She was married in 1950 to Roswell Jim Primeaux and everyone in her family called him Primeaux.... View Obituary & Service Information

The family of Martha Helen Primeaux created this Life Tributes page to make it easy to share your memories.

Martha Helen Primeaux was born in Muskogee Oklahoma in a small...

Send flowers to the Primeaux family.