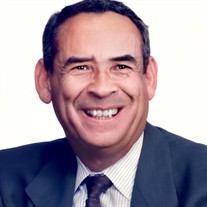 Martin LeBlanc, 84, of Midwest City, Oklahoma, passed away peacefully September 14, 2021, in Horseshoe Bay, Texas. He was born at home February 10, 1937, in Okmulgee, Oklahoma, the son of Joseph and Ophelia (LaTour) LeBlanc. After finishing high school, Martin joined the Army where he served abroad and in the US until his retirement as a Major. While serving our country, Martin commanded an artillery company in Vietnam, where he was awarded a Bronze Star and a Purple Heart. During his career in the Army, Martin served in numerous locations including tours in Germany; Fort Sill, Oklahoma; and Fort Lewis, Washington, where he earned his bachelor’s degree from the University of Puget Sound. While in the Army, Martin married and fathered three sons, Martin Andreas (Andy), Ronald, and Kenneth LeBlanc. After retiring from the Army, Martin went on to work for Certified Chemical in Lake Charles, Louisiana, where he developed his fondness for Cajun food and culture. Martin enjoyed the outdoors, spending countless hours in the country with his brothers while growing up. He instilled that love of the outdoors and hunting in his three sons. His sisters fondly remember him as a very thoughtful brother, always there to lend a hand. Martin is preceded in death by his son, Martin Andreas (Andy) LeBlanc and his siblings, Joseph (infant), Hubert (infant), Ralph, Francis, Bernard, Walter, and Vincent LeBlanc and Agnes Glover. He is survived by his sons Ronald LeBlanc of Shawnee, Kansas, and Kenneth LeBlanc of Horseshoe Bay, Texas; his brother Raymond LeBlanc (Judy) of Chesterfield, Missouri, and his sisters Jo Ann Irwin (Bob) and Bernadine Abernathy (Al) of Midwest City, Oklahoma; and five grandchildren.

The family of Martin M. LeBlanc created this Life Tributes page to make it easy to share your memories.

Send flowers to the LeBlanc family.