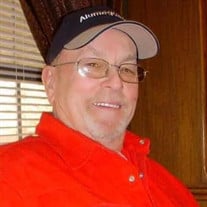 Marvin Eugene “Gene” Crone, 80, of Midwest City, Oklahoma passed away peacefully at home on Sunday January 16, 2022. He was born on January 6, 1942, in Memphis, Texas to Marvin and Eva Crone. Gene joined the heat and frost insulators and asbestos workers union and made it his living for more than 50 years. Gene married Lois, the love of his life on October 17, 1960. They were married for 57 years prior to her death in 2017. He enjoyed playing golf, watching OU and Dallas Cowboys football, reading about History and watching the History channel, as well as watching John Wayne movies over and over with his son-in-law Doug. He looked forward to his hours and hours of phone calls with his son Bobby as well. Gene is survived by his children Tonya and husband Mark Unsell of Petrolia, TX, Ricky Crone of Trenton, FL, Bobby Crone and wife Debbie of Rhome, TX, Marty Lundegreen and her love Doug Terrell of Midwest City, OK; as well as his beloved 15 grandchildren; 38 great-grandchildren; brother Paul and wife Thelma Rowlett of Amarillo, TX; brother-in-love Clenton and wife Diane Pierce; three sister-in-loves Liz Billington, Violet Waller of Amarillo, TX, and Naomi Bailey of Childress, TX; numerous nieces, nephews, and beloved cousins in Lindale, TX; and extended family; and friends who were like family including Denton and Michele Riddle; and last but not least his grand dog Shadow whom he loved very much. He is preceded in death by his wife Lois; mother and father Marvin and Eva Crone; mother-in-law and father-in-law George and Kathleen Pierce; sister-in-love Nellie Lambert; and three brother-in-loves Al Billington, Charles Waller, and Larry Bailey. In lieu of flowers please send donations to Frontier Hospice. (221 N I-35 Service Rd. Ste C., Moore, OK 73160)

Marvin Eugene &#8220;Gene&#8221; Crone, 80, of Midwest City, Oklahoma passed away peacefully at home on Sunday January 16, 2022. He was born on January 6, 1942, in Memphis, Texas to Marvin and Eva Crone. Gene joined the heat and frost insulators... View Obituary & Service Information

The family of Marvin "Gene" Eugene Crone created this Life Tributes page to make it easy to share your memories.

Send flowers to the Crone family.