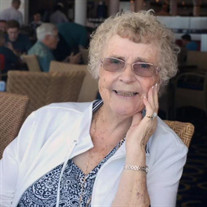 Mary Lou Burgess Ames was a loved wife, mother and Granny. She was born December 30, 1932 to Melvin and Jessie Burgess in Grove, OK. She went to spend eternity with the Lord on August 13, 2021. Mary Lou grew up in Antlers, OK with her brothers, sisters and dear friends The Jacks Girls. In October of 1952, she met the love of her life, J.C. Ames at Northeast Assembly of God Church in Oklahoma City. They were married on April 4, 1953 in Ardmore, OK and have been married for 68 loving years. She raised her family in Seminole, OK before becoming full time RVers and traveling all over for 32 years. She enjoyed cruising and usually took at least one cruise a year from 2000 to 2019, even enjoying 5 “last cruises!” Along with J.C., she traveled to Alaska, California, Hawaii and so many countless places. She attended Capitol Hill Assembly of God in Oklahoma City, but would seek a church home wherever she was. She retired in September 2020 from the Army Corps of Engineers as Lake Attendants from Lake Texoma, Kaw Lake, and Hugo Lake before settling down in Moore, Oklahoma. Mary Lou Ames is preceded in death by her father Melvin Burgess, mother Jessie (Risner) Burgess, brother, Jerry Burgess; brother Melvin and sister-in-law Shirley Burgess; sister Gloria and brother-in-law OD Stone; and son-in-love Bobby Barker and brother-in-love Lester Ames and Arthur Ames. She is survived by her husband, J.C. Ames; sister Ouida and husband James Goodwin, sister-in-loves Sue Burgess and Louise Ames and brother-in-love Harold Ames. Children: Marilyn Barker, David and Jin Ames; and Jackie and Shari Ames. Grandkids: Dave Ames, Kari and Shawn Webber, Zack and Jordan Ames, Ashley Barker, Dustin Ames, and Dausel Ames. Great-Grandkids: Sutton and Sullivan Webber; Enrique and Lucius Ames; Zander, Nolan, Owen, and Miller Ames. Bonus Children: Mark and Shelli Freeman. Bonus Grandkids: Holly and Jeremy Dungan; Kasey and Ian Hunt; Dillon and Abbye Elmore; and Kaitlyn and Chester Whitmore. Bonus Great-Grandkids: Landon Hodge; Ian Jr, Emmitt, and Jayden Hunt; Paisley and Everlie Elmore; and Camden and Bronson Whitmore. Friends who became family: the late John Thoma and wife Judy Thoma, and Andre and Sharron Murray. She is also survived by many nieces, nephews, cousins and close friends. She is now celebrating with our Lord and Savior and family who she joined in Heaven. Mary Lou enjoyed traveling especially cruises so join us in this celebration of life by wearing colorful clothing. She spent her life helping others with acts of service and giving. In lieu of flowers, the family asks that you make of donation of time or money to your favorite charity or church in her honor. Services will be live streamed on this website.

Mary Lou Burgess Ames was a loved wife, mother and Granny. She was born December 30, 1932 to Melvin and Jessie Burgess in Grove, OK. She went to spend eternity with the Lord on August 13, 2021. Mary Lou grew up in Antlers, OK with her brothers,... View Obituary & Service Information

The family of Mary Lou Ames created this Life Tributes page to make it easy to share your memories.

Mary Lou Burgess Ames was a loved wife, mother and Granny. She...

Send flowers to the Ames family.