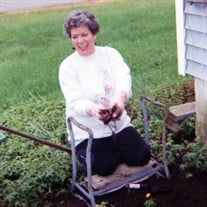 Not sure what to send?

Mary Louise Antonia James (O’Leary), age 69, passed away 8 May 2022. A former New Yorker, she was a Midwest City resident for 45 years. A devoted wife, mother, sister, and grandmother, she enjoyed listening to music, dancing, nurturing nature, gardening, cooking, and spending time with her loved ones. She was a kind soul with a heart of gold who would lend a listening ear or helping hand to those in need. She will be forever missed by her family, friends, and all who knew her. Mary Lou was born in the borough of Manhattan, NY to Louise and Dennis O’Leary on 28 Jan 1953. She was the middle child of two siblings, Barbara and Dennis. She grew up in the Bronx and then Brooklyn, attending catholic school through graduation. She graduated from St. Catherine of Genoa School of Brooklyn, NY. After high school, she worked briefly in an administrative position on Wall Street and found her calling to be a nurse however, while in school, she suffered an injury which would prevent her from pursuing this career path. After becoming a mother, she primarily became a homemaker and worked occasionally in healthcare, hospitality or retail over the years. Upon an initial visit to Oklahoma, she met her husband, Scott and it was love at first sight…as cliché as it sounds, the rest became history. Together they made a loving home and raised their daughter, Amoreena. She is preceded in death by mother, Louise Loverro; father, Dennis O’Leary; brother Dennis O’Leary She is survived by her husband, Scott James; daughter, Amoreena Barks (Chris); grandchildren, Evan and Kelsey Barks; sister, Barbara Newby; nephew Douglas Newby (Jordan), niece Lauren Durand (Will); sister-in-law, Sherri James; nieces Jennifer Hoback, Elizabeth Peter, and Stephanie McKee; Nephew Chris James II; Uncle Patrick O’Leary; the O’Leary and Corbett cousins; cousins Emily Berridy, Edward Berridy, and Jacqueline Stultz. The family expresses their gratitude to Integris Hospice for their care and compassion. Services will be held at Ford Funeral Service in the Candlewood Chapel on 21 May 2022 at 2:00 pm.

The family of Mary Louise James created this Life Tributes page to make it easy to share your memories.