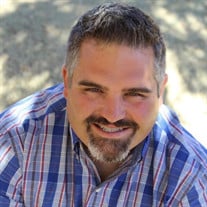 Michael Paul Ash was born December 4, 1975, in Oklahoma City, Oklahoma to David Ash and Shirley Climer. He was a proud graduate of Del City High School-Class of 1994 Eagles. He married Andrea King, April 3, 1999. As a young man, he worked construction with his dad. Michael then spent the majority of his career in the commercial roofing industry. Michael loved his two sons, Kyle and Cameron. He spent many years coaching both boys in basketball, football, and baseball. He was best known as, “Coach Mike” to numerous boys. He had a true passion for coaching and later took great pride and joy in watching his players develop into strong young men. Who would have thought this manly man would seamlessly shift gears into all things pink, glittery, and girly, Emma, who had her Papa wrapped around her little finger. Papa could be found playing with dolls, unicorns, ponies, Guess Who and Jenga. He attended many tea/coffee parties, cheer, dance, and gymnastics classes. Emma was truly her Papa’s girl. Michael was an avid Oklahoma Sooners fan. Honestly, he simply enjoyed all sports. He looked forward to fitting in rounds of golf. He utterly loved celebrating the 4th of July and Christmas. He was our family Christmas Angel. He liked having a home at Lake Tenkiller for family and friends to gather. He was devoted and spent endless hours perfecting that perfect spot Andrea always dreamed of. He was focused on creating a life they didn’t need a vacation from. Michael is survived by his wife, Andrea Dyan Ash, children, Kyle James King, Cameron Michael Ash and Emma Elizabeth King. Father, David Ash; mother, Shirley Climer. Grandmother Star Ash, Siblings; Wendy Mathis (Lloyd), Stephanie Ochoa (Tony) and Tiffany Davis. Sisters-in-law, Keisha Dellosa (Arhmad) and Juliana King. Brother-in-law, JC King (Tissa). 11 cherished nieces and nephews and numerous cousins. Preceded in death by grandfathers, Ali Ash and Paul Climer. Grandmother, ImaLee Climer.

The family of Michael Paul Ash created this Life Tributes page to make it easy to share your memories.

Send flowers to the Ash family.