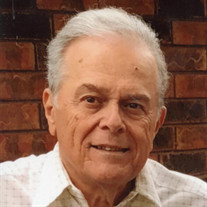 Miguel “Mike” Ramon Ferrer, 82, was called home on January 24, 2020. He was born in Hatillo, Puerto Rico, on December 12, 1937, to Teofilo and Eduvigis Ferrer. The oldest of four boys, he was 8-years-old when his family moved to the Bronx, New York. Mike graduated from Haaran High School in 1956 and soon after entered the Air Force, serving until 1961. He was stationed at Tinker AFB, OK, where he met the love of his life, Peggy Jo “PJ” Riat. They married on May 27, 1960, at the chapel on base. Upon leaving the service, he found work as a computer operator at Tinker AFB, where he remained until his retirement in 1995. Mike and Peggy, who had settled in Del City, OK, raised three daughters whom he adored. He relished his five grandchildren and seven great-grandchildren. Mike was an avid sports fan. His first love was the New York Yankees, but avidly followed Oklahoma State and Notre Dame football. He was a season ticket holder of OSU football for numerous years. He followed OSU and OKC Thunder basketball as well. Mike loved to play golf and watch it on tv. He was a member of St. Paul the Apostle Catholic Church in Del City. Mike had a witty sense of humor, even at the end. He was proud of his Puerto Rican heritage and loved talking about the many family members he had. He cherished many wonderful friendships that he established over the years and enjoyed getting together and catching up. When Alzheimer’s robbed Peggy of her health, Mike took loving care of her until her death in 2011. He is preceded in death by his wife, his parents and two younger brothers, Porfirio and Teofilo Jr. He is survived by daughters Marsie Grisham and her husband David, Valerie Walton, and Rita Ferrer; grandchildren Kelli Harris and her husband DJ, Brianne Stone and her husband Zach, Michael Grisham, Tara Brown and her husband Hunter, and Braden Walton; great-grandchildren Huck, Ryatt, Weston and Hallie Belle Harris; Blakely, Blaze and Baylor Stone; and one on the way. He is also survived by his youngest brother Robert Ferrer and his wife Donna, two nephews, and numerous relatives. The family would like to extend their gratitude to the medical staff at Oklahoma Heart Hospital South who took excellent care of him. In lieu of flowers, donations may be made to the Alzheimer’s Association.

The family of Miguel "Mike" Ramon Ferrer created this Life Tributes page to make it easy to share your memories.

Send flowers to the Ferrer family.