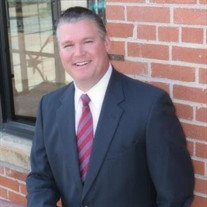 Mike Kevin Walker of Midwest City passed away the afternoon of June 10, 2021 at the age of 58. Kevin was born in Littlefield, TX on December 8, 1962 to James and Vada Walker. Kevin was 1 of 4 children. Kevin moved to Midwest City where he was raised. He graduated from Carl Albert High School in 1981. Kevin went on to marry his high school sweetheart, Tonya Terry of Midwest City, in 1988. They had 3 children Brittni, Blake and Cali. After high school Kevin attended Oscar Rose College and then transferred to South Oklahoma Junior College where he received his degree as an EMT/Paramedic. After working at the Midwest Regional Medical Center in the Emergency Department he became a Paramedic with Midwest City Ambulance Service. After 13 years as an paramedic he attended Southern Nazarene University and graduated with a Leadership Degree. He then applied to Law School at Oklahoma Christian University and has worked as an Attorney since. Kevin was involved with the Christian Legal Society and OK lawyers for Children since graduating Law School. He served for over 9 years as a board member for Mid-Del School systems. He enjoyed being an advocate for the teachers and coaches in the school district. Kevin was deeply involved in the church. He was a Sunday school teacher to the 5th and 6th graders. He created a foundation at home built on God’s word. He loved worshiping with his children. Kevin’s father, James, was his hero and looked up to him in everything he did. Kevin was his children’s biggest fan at all their activities. He will always be remembered for his consist support through each sport they played. He traveled constantly to watch them play. He had many hobbies but being there to cheer his kids on would have been his absolute favorite. Kevin did enjoy golfing, fishing, watching and playing sports. He especially loved going to Thunder games and watching football all day while having the grill going. He had very fond memories of traveling to the beach and the mountains as a family, but also those simple Sunday night family dinners. Anything that involved his family, he loved. Being able to watch his children play soccer at the college level was everything to him. No one will ever question the love Kevin had for his family and friends while here on Earth.

Mike Kevin Walker of Midwest City passed away the afternoon of June 10, 2021 at the age of 58. Kevin was born in Littlefield, TX on December 8, 1962 to James and Vada Walker. Kevin was 1 of 4 children. Kevin moved to Midwest City where he was... View Obituary & Service Information

The family of Mike Kevin Walker created this Life Tributes page to make it easy to share your memories.

Mike Kevin Walker of Midwest City passed away the afternoon of...

Send flowers to the Walker family.