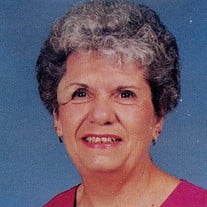 Monty Lois Turner October 22, 1929-January 17, 2020 On Friday, January 17, 2020 Monty passed into the arms of her Lord and Savior. She was born on October 22, 1929 to Karl and Monetta Althausen in Ranger, Texas. At an early age she learned to play the piano, and worked hard to become a trained singer. Her beautiful soprano voice was heard at recitals, or from choir to choir during her life. Monty graduated from Capitol Hill High where she was a member of the Acapella Choir, Drama Club, and Ki Yi Pep Club. She married the love of her life, Claude Leon Turner, on June 18, 1948. They were married until his death August 25, 1992. During World War II she joined the Civil Air Patrol where she earned the rank of Major. Monty and Claude were long time members of Capitol Hill United Methodist Church where she was a member of the Crusader’s Class, Church Choir, and United Methodist Women. She later became a member of St. Matthew Methodist Church of Midwest City where she was a member of the United Methodist Women, Saints Sunday School Class, taught Sunday School Classes, and the Ladies Bible Study Group for several years. She was defined by her incredible faith, and was a loving Wife, Mother, Grandmother, and Great-Grandmother. She worked as a substitute teacher and school secretary. From there she worked at 1st National Bank of Oklahoma City, and volunteered weekly at Midwest City Hospital, but her main focus was always her children. She was a homeroom mother, Cub Scout Den Mother, DeMolay Mother, Job's Daughter Mother, and enjoyed sharing those special moments with her children. She loved being around anything her children or grandchildren were involved in. She is preceded in death by her parents, and husband. She is survived by her children and spouses, Karl and Jennifer Turner of Noble, Mark and Sharon Turner of Colleyville, Texas, Chris and Pamela Turner of Oklahoma City, Genetta and Dean Kuesthardt of Modesto, California, Derek and Crystal Turner of Oklahoma City; Grandchildren Joshua, Zachary, Ethan, Jacey, Ashley, Hunter, Austin, Cameron, Meghan; and two great-grandchildren Ryan and Ryleigh.

The family of Monty Lois Turner created this Life Tributes page to make it easy to share your memories.

Send flowers to the Turner family.