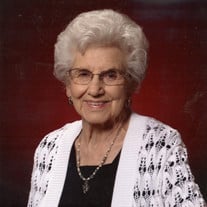 Nell Merida went home to be with the Lord, May 22, 2019. Nell was born in Hollis, OK on September 27, 1924 to Charley and Letha Crow. Nell married Paul Merida, June 30, 1941. They lived in Hollis and Altus, OK where they had two sons, Boyd and Steve. They were active in the Baptist Church. They later moved to Pryor, OK where they owned and operated a moving company.Nell was a bookkeeper and bank teller during her career. Nell moved to Del City in 2001 after Paul passed. Nell was preceded in death by her husband Paul, son Boyd and two sisters, Judy and Collien. Nell loved her Lord, family, church, reading, gardening and playing dominos. Nell is survived by son, Steve and wife Anita of Weatherford, OK, daughter-in-law, Karen (widow of Boyd) of Del City, Also four grandsons; Rhett, Jay, Charlie and Cody. One granddaughter, Kelly. Two great granddaughters, Lauren and Jaylee and one great grandson, Tyler. As well as many nieces and nephews. Funeral service for Nell is at Sunnylane Southern Baptist Church of Del City with internment at Resthaven Cemetery in Oklahoma City.

The family of Nellie "Nell" Ruth Merida created this Life Tributes page to make it easy to share your memories.

Send flowers to the Merida family.