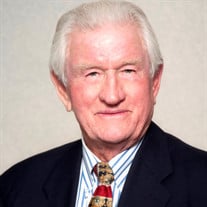 Norris Allen Price, 88, died peacefully at home with his beloved wife of 64 years, Betty, his children, grandchildren, brother, and close family at his side. Norris was born in Hallett, OK, and raised in Eufaula. He was the son of Benton McMillan and Edna Vivian Price. He graduated from Eufaula HS in 1949, attended Northeastern State College in Tahlequah (1949-50), and was a member of Phi Sigma Epsilon. While attending an NSC football game, he met the love of his life, Betty, sparks flew, and that love lasted until the moment of his death. It was a 70-year love affair. His college education was interrupted from 1950-52 as he proudly served his country as a Sgt. in Army M Co. 180th Reg. Inf., the "fightin’ 45th”, during the Korean conflict. Norris graduated from OU in 1954, with a BBA in BS Mgmt., where he was a member of KA fraternity. He and Betty married Feb. 6, 1954, and she soon started teaching at Del City Elementary while Norris earned his real estate license and began selling homes and developing real estate, eventually starting his own company. He was a risk taker, businessman, and entrepreneur who spent a lifelong career in real estate and investments. He and Betty raised their children, Lisa, Randy and George “Skip” in Del City and joined Sunny Lane Methodist Church in 1955. Gov. George Nigh appointed Norris as Director of OK State Civil Defense, and later Executive Director of the OK Real Estate Commission. He was active in numerous civic and professional organizations, earning many awards, and local, state and national positions. He was President of the Midwest City-Del City Bd of Realtors and a Realtor of The Year, is a former Regent and a current member of the Bd of Governors for the Rose State College Foundation. He was inducted in the Del City Hall of Fame and is a 32nd degree Mason. As a 45-year member of Del City Kiwanis, he was the enthusiastic song leader for “God Bless America” each week. Norris was an avid outdoorsman who loved snowmobiling, water sports and motorcycles. He was a member of the OKC Boat Club, a Harley rider, and a dirt bike racing competitor up until his 50’s. In his youth he was a Golden Gloves boxer. His father was an agent-telegrapher with the MKT railroad which sparked his passion for trains, and he enjoyed sharing his model train collection especially at Christmas. His lifetime motto was "Carpe Diem, (Seize the Day)." He lived each day to the fullest with passion, love, friends, and a devotion to family and he would encourage others to do the same. With Betty at his side, they lived a life filled with the arts, civic affairs, politics, philanthropy, travel, and all things celebrating Oklahoma. He is preceded in death by one son, John Randall "Randy." He is survived by his wife Betty; daughter Lisa, OKC; son George (Lisa), Edmond; grandson, Matthew, Tulsa; granddaughter Natalie (Brady) Ford, and great granddaughter Payton, OKC. A brother Don (Evelyn), Midwest City; and many nieces, nephews and their families. A celebration of his life will be held at 2 p.m., Thursday, Jan. 23, at Ford Funeral Home. In lieu of flowers, the family asks donations to the charity of your choice in his memory.

Norris Allen Price, 88, died peacefully at home with his beloved wife of 64 years, Betty, his children, grandchildren, brother, and close family at his side. Norris was born in Hallett, OK, and raised in Eufaula. He was the son of Benton McMillan... View Obituary & Service Information

The family of Norris A. Price created this Life Tributes page to make it easy to share your memories.

Norris Allen Price, 88, died peacefully at home with his beloved...

Send flowers to the Price family.