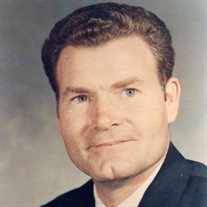 Okie Harold Scott, 84, of Newcastle, Oklahoma passed away on January 10, 2022. He was born on May 19, 1937 in Centrahoma, Oklahoma to Leslie and Effie Scott. He was youngest of 9 children. Okie Harold Scott, also known as OH, moved to Oklahoma City from Willington, Texas in 1950 at the age of 13. He worked for the Oklahoma City Sanitation Department, Sinclair gas station in Del City, and Wonder Bread Bakery in downtown Oklahoma City until earning his GED, which opened the door to begin his career with the Oklahoma City Fire Department until his retirement in 1986. Okie progressed through the ranks from a firefighter to corporal, retiring as a driver with the rank of sergeant. Okie was known to have an incredible work ethic and worked multiple jobs to support his family, including his own lawn care business for over 45 years. Okie met the love of his life Charlotte Elizabeth Bishop, affectionally known as “Prissy”, and they married on December 4, 1954. They were married 67 years and the Lord blessed them with three children: Sharon Diane, Randall Harold, and Deborah Ann. Okie was a person of faith in Jesus Christ. He was deeply committed to his family and was happiest when surrounded by his children and grandchildren. Okie showed his love by being “present”. He was the #1 fan at the ballgames of his kids and grandkids. He was president of the Del City Eagles quarterback club and always supportive of his grandkids at the Choctaw schools, and later known as ‘Team Grandpa’ at the Tuttle Tiger games. Okie relished sharing life lessons, memories, and often preached the importance of hard work. Okie is survived by his wife Charlotte Elizabeth Scott; two daughters Diane Ketterling and Debbie Driver; son Randy Scott and wife Carla Scott; grandchildren Tim Simmons, Josh Simmons, and Matt Simmons, Macall Scott, Meredith Scott Fagin, Beau Driver, Max Driver and Storie Driver; nine great-grandchildren; brother Melvin Scott, and numerous other family members. He is preceded in death by his parents Leslie and Effie Scott; seven brothers and sisters; Daughter-in-law Dana Gardner Scott and Son-in-law Ted Ketterling.

Okie Harold Scott, 84, of Newcastle, Oklahoma passed away on January 10, 2022. He was born on May 19, 1937 in Centrahoma, Oklahoma to Leslie and Effie Scott. He was youngest of 9 children. Okie Harold Scott, also known as OH, moved to Oklahoma... View Obituary & Service Information

The family of Okie Harold Scott created this Life Tributes page to make it easy to share your memories.

Okie Harold Scott, 84, of Newcastle, Oklahoma passed away on...

Send flowers to the Scott family.