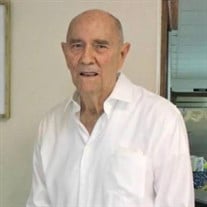 Olen Ray Sutton was born on May 23,1936 in Garvin County, OK. The son of Ardie Preston and Percy Mae (Bond) Sutton, Olen spent his youth in Harrah, Oklahoma where he graduated High School in 1955. He went on to receive a bachelor’s degree from Central State University and a master’s degree from Oklahoma State University. When it comes to football in Oklahoma, Olen bled orange, not crimson. Olen was married to Roberta Lee Steele on May 20, 1966. Together they raised four sons in Warner, OK and later had seven grandchildren and three great-grandchildren. They were married 54 years. After serving in the Army National Guard, the US Air Force and the Oklahoma Air National Guard Olen retired as a Senior Master Sergeant after 24 combined years of service. He also had a distinguished career at OU Medical Center as Chief of Police and Fire and Safety Officer. He went on to teach at Connors State College and was able to retire for the second time. Lake Eufala then became his home where he was an avid fisherman. He was a dedicated US Army Corps of Engineers volunteer and a founding member of the Dam Fisherman Association. He was also a proud supporter of Connor’s State College and Warner High School athletics. Olen and Roberta have been members of Country Estates Baptist Church (Midwest City) for the past ten years. Olen was preceded in death by sons; Steve and Craig Sutton and parents; Ardie and Percy Sutton, siblings; James Sutton, Ann Parsley, Syble Durant and Haskell Sutton. Olen is survived by wife Roberta Sutton; sister Inez Cox; son Jeffrey Sutton; son Douglas and daughter-in-law Leanne Sutton; daughter-in-law Diedra Sutton; grandson Drew Mitchell; grandchildren Taylor, Daniel, Tara, Kieley, Braden, and Briana Sutton; great-grandchildren Cooper, Cora, and Eleanora; as well as, mother-in-law “grandma” Mary Merkle. Olen passed peacefully at home On Friday, April 17, 2020 after a courageous battle with lewy body dementia. He was 83. A post-COVID service and graveside memorial will be scheduled as allowed in Warner, OK. In lieu of flowers, please consider a memorial contribution to the Michael J. Fox foundation. Please visit www.michaeljfox.org and search for Olen in the tribute pages. The family extends a special thank you Jinger and Jan of Heartland Hospice for their exceptional care and support.

Olen Ray Sutton was born on May 23,1936 in Garvin County, OK. The son of Ardie Preston and Percy Mae (Bond) Sutton, Olen spent his youth in Harrah, Oklahoma where he graduated High School in 1955. He went on to receive a bachelor&#8217;s degree... View Obituary & Service Information

The family of Olen Ray Sutton created this Life Tributes page to make it easy to share your memories.

Send flowers to the Sutton family.