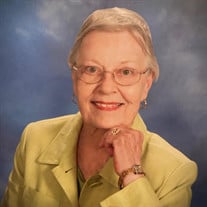 Patricia J. Shuchart of Midwest City, Oklahoma passed away on February 10, 2022. She was born on February 19, 1937 in Hanover, Pennsylvania to Curtis and Kathleen Orwig. Pat grew up in New Freedom, Pennsylvania and after high school moved to Baltimore, Maryland to attend nursing school and become an RN. She married Jerome F. Shuchart on October 15, 1960. They lived in York, Pennsylvania for several years and had three children when Jerry’s job transferred them to Tinker AFB in June 1966. Pat stayed home while the kids were young. When the youngest started school, she went back to nursing, working weekends in the ER at Midwest City Hospital for several years. During this time, she went back to school at Central State University (now UCO) to get her Bachelor of Education degree. She joined Mid-Del Schools as an LPN instructor and school nurse, and retired after 20 years in 1998. Pat enjoyed many trips throughout the US while the kids were growing up, but her real passion was overseas travel. She was able to fulfill that dream and made several trips to England, France, Germany, Italy, Romania, Greece, and Turkey as well as a trip to Hawaii and an Alaskan cruise. Pat and Jerry enjoyed playing in a bridge group and joined a dinner club with friends for many years. Pat was a unique and caring person and was always interested in what was going on in the world and in your life. She will be greatly missed. She is survived by husband Jerry, daughter Kelly (Bruce) Earnest, daughter Jill Cracraft, daughter-in-law Ada Shuchart, and granddaughters Mikayla Earnest, Alexandra Earnest, and Kiera (Daren) Simmons. She was preceded in death by her parents, Curtis and Kathleen Orwig, her son Neil, and her granddaughter Victoria Earnest. Pat was a long time member of St. Philip Neri Catholic Church in Midwest City. There will be a Rosary at Ford Funeral Service at 6:00 pm on Thursday, February 17, 2022. A funeral mass will be held at 10:30 am on Friday, February 18, 2022 at St. Philip Neri Catholic Church in Midwest City. In lieu of flowers, the family requests donations be made to the Alzheimer’s Association.

Patricia J. Shuchart of Midwest City, Oklahoma passed away on February 10, 2022. She was born on February 19, 1937 in Hanover, Pennsylvania to Curtis and Kathleen Orwig. Pat grew up in New Freedom, Pennsylvania and after high school moved... View Obituary & Service Information

The family of Patricia Joan Shuchart created this Life Tributes page to make it easy to share your memories.

Patricia J. Shuchart of Midwest City, Oklahoma passed away on...

Send flowers to the Shuchart family.