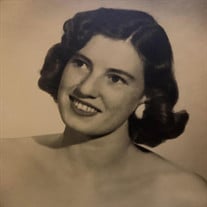 Patsy Ann Jackson of Choctaw, OK, passed away at the age of 85 on May 3, 2022 after a long battle with Alzheimer’s. Pat was born June 21, 1936, to John Henderson and Myrtle Henderson Baker in Guy, AR. She was the oldest of 10 children. At the age of 7 Pat moved to Midwest City to live with her aunt and uncle for a short time before be her mother and 2 sisters joined her. Her mother remarried Merle Baker and raised the girls as his own. Pat went on to graduate from Midwest City High School in 1955. During that time at her senior prom her friend set her up on a blind date, with the soon to be love of her life Edward Jackson (EJ). The two would be married the next year on December 21, 1956. Together they would have 4 children: Edward who passed shortly after birth, Pam, Eddie and Lisa. Pat was a dedicated mom, while the kids were growing up, she stayed at home to take care of the kids and household. She was happily involved with them in their softball, baseball, girl scouts, boy scouts, and school activities. Once the kids had grown up in the mid 1980’s Pat would decide to enroll into trade school for bookkeeping. She would follow this career path for many years to come. Pat loved the outdoors. She was an avid gardener, shared and traded many plants from her garden. The family took many fishing and camping trips together. They loved to travel in their camper to different lakes across Oklahoma. She was active in local politics, taking on roles in different campaigns. Most of all, she loved her family. She was a very proud grandmother to 5 grandsons and 7 great-grandchildren. Pat lived live to its fullest and never met a stranger. Pat was preceded in death by her parents Myrtle and Merle Baker, John Henderson, son Edward, two sisters Peggy Henderson and Jodie Henderson Brister, daughter in law Rhonda Jackson and great granddaughter Jazlyn Chong. She is survived by her husband EJ Jackson; children Pam and husband David Harris, Eddie Jackson, Lisa and husband George Chong; 5 grandsons Dusty and wife Rebecca Harris, Cody Harris, Edward Jackson, Aaron and wife Kyla Chong , Shane Chong and partner Kayla Harris; as well as 6 great-grandchildren Cooper, Oliva and Marley Harris, Maximus, Nixon and Lexee Chong.

The family of Patsy Ann Jackson created this Life Tributes page to make it easy to share your memories.

Patsy Ann Jackson of Choctaw, OK, passed away at the age of 85...

Send flowers to the Jackson family.